Mark Merritt - Peace of Me 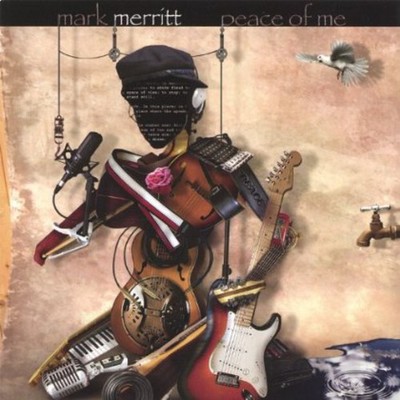 Singer-songwriter Mark Merritt's Peace of Me, signals a benchmark occasion in the 20-year history of Fort Worth-based Reload Record Co. "The CD is really more of a songwriter showcase for our core bunch of composers," insists Merritt, artist and singer of immense versatility. "It happens to have my name on it, out front, but it's essentially a collaborative effort of Earl Musick, Roy Robinson, John Gomez, and myself." This hardly obscures the passion or the painstaking balance of spontaneity and perfectionism with which producers Merritt and Earl Musick have approached Peace of Me. The CD-album has been in gradual production at Reload Record Co.'s affiliated RockHouse Studio in Fort Worth, with six years' worth of original compositions by Merritt, Musick, Robinson, and Gomez. "It's about cutting loose and doing your own thing, even in the midst of personal turmoil," Merritt says of one centerpiece song, "Great Unknown." He adds: "Kind of speaks about how I approached the album as a whole. "Peace of Me, in addition to being a songwriters' album, is also a story-telling album," continues Merritt. "Some of the songs have personal meaning. Others tell their stories through the viewpoints of others. The album, though in more of a Texas roots-oriented groove musically, is definitely Americana, lyrically. I wanted these songs to tell tales of the modern American life." Another point of the collection is to provide a showcase for Merritt's multi-instrumentalist skills, and for his abilities as a recording engineer to make "layered," or multi-tracked, ensemble performances sound like the simultaneous and integrated performances of several musicians. Merritt's so-called 'self-training' in music had evolved into playing the guitar alone as though it were a full stringed-instrument ensemble varying and adjusting his picking-and-fretting styles in a single performance to accommodate lead, rhythm, and bass-line elements. And this understanding of how such elements, plus percussion, fit together has served him well in arranging and performing separate instrumental parts as incremental additions to a recorded performance. Merritt, meanwhile, has served the cooperative Reload Record Co. As a session engineer and a producer/co-producer, with such credentials as Earl Musick's Privateer album, John Gomez' Head First debut CD. Growing up in Duncanville, Texas, Merritt discovered the guitar as a creative outlet at an early age, honoring a family legacy stemming from his grandfather's abilities as a mandolinist and his father's guitar-playing skills. Mark took up additional stringed instruments as he progressed into his teens and early twenties. The bass became his primary instrument at the time, Merritt explains, because it was "way more comfortable. However, If it had strings on it, then I would attempt to play it," Merritt explains. "With guitars and the mandolin in particular, I found a connection on an emotional level." He describes two aspects to his playing: "One is that pure, raw emotionalism, where you can turn off all the stuff you've learned and play whatever the heart tells your fingers to do," Merritt says. "The other is that of striving for a bit of perfectionism, where you hammer at it until you get it just right. The trick is to reconcile those sides with one another.' Over the years, his tastes broadened even as he retreated from the rock-band scene to hone his skills in isolation, picking up a range of additional tastes from Southern gospel, to classical, to eclectic artists, while eventually honing in on Texas music. "On Peace of Me...," he adds, "we decided to have a grand experiment and have me handle most the instrumentation, as an extension of working all the parts of a song into a single performance on one instrument. This really forced me to do things musically that I hadn't done before. The sense of accomplishment is pretty strong, here, since I do all this primarily for the art of creating music. The greater point is the music itself, and the way we have recorded it, allowing the music to seek it's own level rather than as a purely commercial product. It's music for music's own sake." Mark Merritt's thoughts on highlights of Peace of Me... follow: "Way Past Cool" pokes fun at fads and trendy things. It's a blast to play, and the lyrics are quite funny. Basically, it says to not take yourself too seriously, and we all at one time or another get caught up in the moment. (How else do you explain "Disco"?) "Eyes Wide Open" is a bit of a departure musically from the album. Lyrically, it's my favorite on the album, as it's a reminder to look both ways, consider both sides, don't be afraid to take a chance, and if you need to, take a stand. "Desperate Man" is about as Americana as you can get, with a blues flair. The song tells the story of someone being pushed to the brink of a criminal life because he just can't get by ...quot; only to realize that if he takes that path, he'll kill his soul.

Here's what you say about
Mark Merritt - Peace of Me.