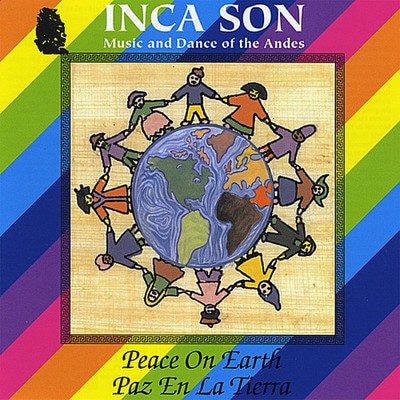 This heartwarming collection of international holiday tunes includes traditional favorites and lively original compositions by Cesar Villalobos L. such as "Hee, Hee, Ho, Ho". This magical song, written in the spirit of Jingle Bells, is dedicated by Cesar to his kids and all the children of the world, and is the number one favorite of school children at all Inca Son holiday concerts. The CD is guaranteed to spread the joy and happiness of the holiday season to all listeners. People around the world, beyond differences of faith and ethnicity, are united by a common hope for peace on earth, hence the title of the album. One Language: HEART; One Race: HUMANITY; One Religion: LOVE Inca Son means "Sound of the Incas." This world acclaimed band plays the centuries-old music of the Andes of Peru, home of their Inca ancestors. In addition, Inca Son performs music from throughout Latin America, and through original, vibrant arrangements, lends an Andean flavor to well-known modern pop tunes. INCA SON is a Peruvian music and dance ensemble with numerous awards and performing credentials, including the 2007 Independent Music Award for "Best World Traditional Song" and the Boston Music Award for "Outstanding World Music Act". They are the first Peruvian group to win the coveted INDEPENDENT MUSIC AWARD! Their vibrant sound has entertained audiences of all ages throughout the world. With 12 CD's to their credit Inca Son continues to flourish, expanding it's huge fan base with each new release. Inca Son has played on some of the greatest stages around the world, including Carnegie Hall, Boston\'s Symphony Hall (with the Boston Pops), Kennedy Center, US Capitol, the White House, Red Square in Moscow, Russia and the Teatro del Verme in Milan, Italy, just to name a few. Inca Son is now recognized as one of the world's best World Traditional Music groups. In the words of Keith Lockhart, conductor, Boston Pops, \'Their music is of the highest caliber\'