The Gostation - Passion Before Function 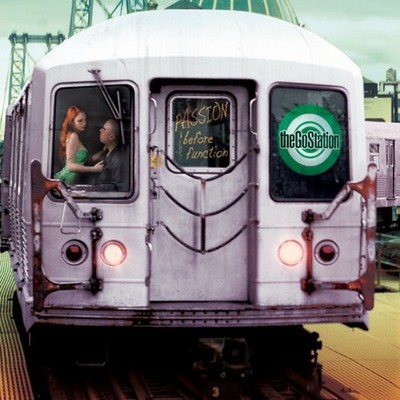 Transporting listeners to a place where melody reigns, cultures clash and combine, and feedback fills the sky, The GoStation is a state of mind as much as a band. Hailing from New York City, this five-piece force is on a musical mission to restore rock to it's rightful place - the hearts and minds of the people. Embracing the art of the anthem, The GoStation have willfully eschewed the structureless noise of many of their contemporaries, opting instead for epic compositions marked by masterful guitar interplay, a steady rhythmic punch, and huge sing-along choruses. Calling to mind everyone from Oasis to The Strokes by way of U2, the band are far more concerned with reviving the classic art of songwriting than becoming the darlings of any fickle scene. The GoStation fired the first shot from their arsenal with the release of their debut EP, Quiet Zone, in 2005. The disc's five songs received major support from outlets as diverse as Seattle's KEXP, NYC's 92.3 K-Rock and Q104.3, XM and Sirius satellite radio, and WOXY.com. Performances at CMJ, SXSW, and the NEMO festival's ASCAP showcase followed, along with in-studio appearances, a spate of rapturous reviews, and shows with bands including The Dears, Diamond Nights, White Rabbits, Sons & Daughters, The Bravery, The Mooney Suzuki, The Upwelling, Locksley, and Elefant. But the EP was just a teaser for the real fireworks: 2007 sees the release of the first full-length album from The GoStation, Passion Before Function. To bring this long-awaited project to life, the band once again teamed up with producer/engineer Bill Racine (Rogue Wave, The Flaming Lips, Phantom Planet) to record amidst the cacophony and hysteria of their native metropolis. Over a year in the making, the album finally brings the sounds that have been living in our heroes' heads to full, sparkling life. Kicking off with the feedback-drenched crescendos of lead single 'All Together Now,' Passion Before Function plays like a sonic rollercoaster, racing to transcendent peaks and spiraling into tumultuous valleys. From the bittersweet lift of 'Not Enough' to the schizophrenic, horn-riddled euphony of 'Common Ground,' and from the ominous rumble of 'Next in Line' to the string-drenched strains of 'When I'm Gone,' The GoStation have emerged with an album that once-and-for-all truly defines their aesthetic of towering, layered songs, designed not to split the masses into fractions, but to bring them together as one. If you've been waiting for something, anything, to save you from the vagaries of daily existence, this is your chance to escape - even for a little while. And it really couldn't be simpler. Just press play, and let the music do the rest. We'll see you there.

Here's what you say about
The Gostation - Passion Before Function.