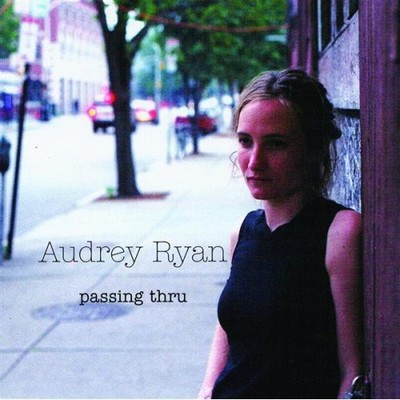 Audrey Ryan performs original alternative jazz/rock. Her music is lyrical, eclectic, innovative, and has been described as 'genre-bending' and 'multi-genred' by many. Tunes vary from a latin beat to a jazz groove, a folk song to a funky rock diddy. Jazz is the most common influence for Audrey and the musicians in her band instrumentally (anything from Miles Davis to Medeski) and the 7th chords are what sets them apart from your regular rock and folk bands. It adds complexity to the tunes in trying to balance song structure and improvisation. But really you have jazz musicians playing a singer-songwriter's music and in the end it comes out more pop than jazz. Audrey's favorite modern bands are Radiohead, Wilco, and Stereolab. 'I grew up on Guns-N-Roses while my parents listened to Dylan, Cash, Neil Young, and Joni Mitchel. And somehow this all makes it into the sound.' The title track, 'Passing Thru,' is a haunting, bittersweet melody fueled by forlorn fiddles, dreamy vibes, and reflections on transience: 'But why's it keep on ending? You know I'm tired of making all these new friends.' The cheeky 'Slick Chick Sly Fly' uses funky guitar riffs and driving drum rolls to wax poetic about summers in local bars; lyrics like 'No you don't need just one more drink or you might go home with another creep' are delivered with a wink. 'Run' daringly combines nursery rhymes with activism, punctuated with barrages of skittish instrumentation--yet somehow the blend is seamless. The momentum continues with the energetic jazz romp 'Espresso Bean,' which embarks on 'curves and bends you know by heart and yes, the speed limit is much to slow' and leads to a speeding ticket blamed on too much caffeine. Born in Bar Harbor, Maine, Audrey Ryan's musical trip began with violin lessons at age 7, an introduction to guitar at 10, and songwriting that started in middle school. She studied at the Sydney Conservatory of Music, challenging herself to take an improvisational approach to composing. In addition to teaching violin, guitar, and music theory, she's traveled throughout Africa and Asia, where her songwriting continued to evolve. Ryan cut her teeth in jazz, bluegrass, and experimental bands throughout New England and now performs nationwide. She plays with her Cambridge-based band live and on the new album, Passing Thru. A string of tour dates in support of the album are planned for this summer and fall.

Here's what you say about
Audrey Ryan - Passing Thru.