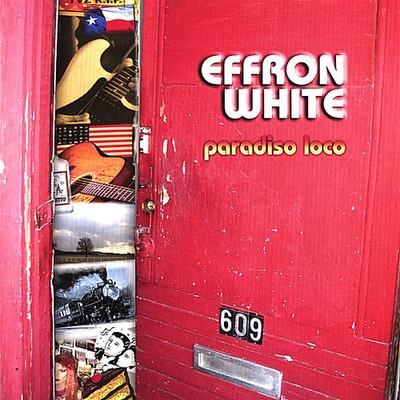 Hey, EFFRONites! Effron's new CD, 'Paradiso Loco' is NOW AVAILABLE!!! 'Paradiso Loco' was produced, recorded, and mixed by The East Side Flash at Flashpoint Recording Studio in Austin, Texas. It is distinctively Austin flavored, boasting the tremendous talents of some of Austin's finest musicians: John Inmon (Jerry Jeff Walker, Lost Gonzos Band, Jimmy LaFave) on guitars; Paul Pearcy (Jerry Jeff, Dixie Chicks, Terri Hendrix Band), drums and percussion; Glenn Fukunaga (Dixie Chicks, Terri Hendrix Band), bass; Danny Barnes (Bad Livers, Robert Earl Keen), far out banjo; The East Side Flash, dobro, hot piano!, and organ; Darcie Deaville, fiddle and backup vocals; and Hilary 'Wild Chile' Adamson, backup vocals. Paul Pearcy says, 'Effron White has what it takes as a songwriter. Every song tells a story and his voice is full of the character needed to deliver it. While recording his CD, I was impressed with the songwriting and the ease with which the musicians fell into the groove. THIS CD MUST BE HEARD!' The Fort Worth Weekly says, 'Arkansas native Effron White's vocal style has been compared to that of Bob Dylan, Tom Waits, and John Prine. That's like saying "He sounds as if he's got strep throat, lung cancer, and tuberculosis all at once." But don't give the dude a lozenge. His jagged vocals are the perfect icing for his Americana country-blues music. Dylanesque croaking, earthy subject matter, and quality musicianship make White's third self-released album, Paradiso Loco, a keeper.' The album flows with a nice groove and thought-provoking lyrical slices, especially when he sprinkles colors into his descriptions: "hair down her back like a red waterfall," "tears I'm crying in the blue light of our tv," "as I look out this black window." In "Misery's Mystique," he ponders the artist's life of embracing desolation in exchange for lassoing a muse. "You unravel every truth that lies beneath, deeper than skin, sharper than teeth." 'White earned the Kerrville New Folk Award in 2004, putting him in exclusive company, along with Lyle Lovett, Robert Earl Keen Jr., James McMurtry, Darden Smith, and several other great singer-songwriters.' White was voted 'best Singer-Songwriter' at the Northwest Arkansas Music Awards in 2006.

Here's what you say about
Effron White - Paradiso Loco.