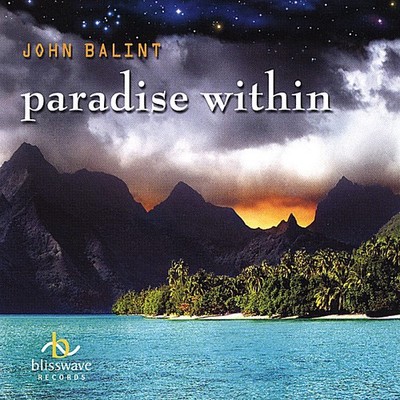 John Balint, recording artist and founder of Blisswave Records, says he wants to help people rise above their limitations and move beyond their differences. 'Creating beautiful and uplifting music is one of the ways I'm hoping to make an impact.' If the reviews are any indication, he's well on his way toward that goal. Chuck Diliberto from Awareness Magazine wrote, 'Balint's music is a bright light of inspiration, unjaded by current events, quietly illuminating music's role as a universal communicative of the truth beheld innately in all of us. Excellent offering.' John's second CD, Connected, comes on the heels of his debut success Paradise Within, which went to #2 on the New Age Voice radio charts in the Spring of 2002, and stayed in the top-100 for five months. 'Connected is an album that celebrates our shared humanity. We have all these common goals, and yet we can't seem to get along as a species. I'm trying to return the focus to the things that can help us move forward-our compassion, humor, generosity, forgiveness-the qualities that remind us of all the ways we are connected. I'd like to see us stop reacting to one another in the aggressively judgmental manner that currently characterizes our country's foreign policy.' Balint was destined to land in the recording arts because music was his earliest passion. Born in Santa Barbara, he began learning to play traditional Hungarian songs at age four. 'My grandfather would play the accordion, and I'd follow along on the piano. Each time I'd visit him, he'd teach me another song-always by ear.' Throughout his childhood, music was a central focus in John's life: 'When I was ten, I began taking formal lessons and learned to read music. I was drawn to jazz because I loved the richness of the chord vocabulary. Although I never stopped playing the piano, in junior high, I also learned to play drums. To this day, when we entertain, our dinner parties are almost always punctuated by drumming circles. Everyone grabs a drum and joins in-it can go on for hours!' John's interest in electronic music began in the late 70s when he helped his dad build a rudimentary digital synthesizer. 'Although the neighbors probably thought we were nuts-with all these weird noises coming from our garage-it was quite an experience for me. It taught me the basics of synthesis, and prepared me for the MIDI revolution of the 1980s.' Balint's early influences included classical composers (Chopin, Beethoven, Copland, Satie), pop/rock keyboardists (Elton John, Ray Manzarek, Keith Emerson), ambient pioneers (Brian Eno, David Sylvian and Robert Fripp), jazz virtuosos (Miles Davis, Bill Evans, Pat Metheny and Lyle Mays), and synth-pop innovators (Gary Numan and Thomas Dolby). In more recent years, Balint has taken inspiration from Ralph Towner's Oregon, René Dupéré (of Cirque du Soleil fame), Peter Gabriel, Elvis Costello, and Mark Knopfler. 'I am drawn to anything that is well produced. Good songwriting, arrangement, and recording quality are very important to me-more so than the genre of the music.' In college, Balint pursued other interests, and graduated from the University of California at Santa Barbara with a BA Degree in computer-based design. 'The graphic design world was just beginning to embrace computers for certain production tasks, but hardly anyone knew how to use the new tools. My timing couldn't have been better-even before I graduated, I found myself in high demand as a consultant to ad agencies.' John wrote and published a book (Type, Graphics and Macintosh) on the subject of desktop publishing for professionals, gave seminars, and within a year started his own design agency. He quickly became a leader in the field of catalog and museum book design, and won numerous design awards. When Balint finished at UCSB, he also plugged back into synthesizer music. MIDI (Musical Instrument Digital Interface) had just come upon the scene, allowing the interconnection of musical instruments with computers. 'Suddenly, there was this whole new way to create music. I was in heaven.' He began composing instrumental music, and by the early nineties he was hired by Jheri Redding to create musical soundtracks for Nexxus commercials and touring stage shows. 'It was an interesting assignment-Nexxus wanted this wild fusion of dance-pop and new age, so I gave it to them!' This led to scoring jobs for several special education videos which later won awards at the New York Film Festival. In the early 1990s, John studied for several years under pianist Larry Karush (who started the avant garde jazz trio Mokave, along with bassist Glen Moore and percussionist Glen Velez). In 1996, Balint released his first album, Beneath the Blue, on a regional basis. Paradise Within went to #2 on the New Age Voice top 100 airplay chart in Spring of 2002.

Here's what you say about
John Balint - Paradise Within.