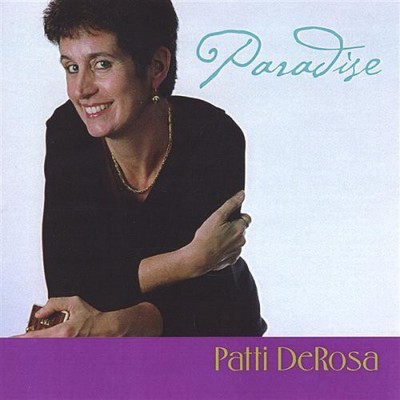 Question: What do you get when you cross an engaging singer-songwriter-guitar player, a former steel drummer, and a social activist? Answer: Patti DeRosa! What people are saying about Patti DeRosa... 'A honey-warm voice, clear and adventurous guitar work and incisive lyrics are all hallmarks of Patti's work, and they are still only the tip of her talent iceberg. See this musician soon wherever you can and tell a friend. It'll be the best â€-I told you so' that you've ever told". Vance Gilbert "She breaks out of her straight folk box and let's herself swing with smooth vocals made for the blues, easing naturally into the groove like melted butter...a cool drink on a hot summer's night..." Kevan Breitinger, Indie-Music.com 'Patti DeRosa is a gem that stands out in the vast sea of singer/songwriters.' Madalyn Sklar, GoGirlsMusic.com "Patti DeRosa is a pro with a strong following who always brings out a bunch of fans. The real watchword in my mind is "connection", and not every performer has it, but Patti connects big time. Her songwriting and lyrics focus on the human condition in a way that few can. I'm thinking of Bob Dylan here..." George LeBlanc, The Nameless Coffeehouse, Cambridge, MA "...a fresh voice with a rich tone that delivers upbeat, heart-warming lyrics, supported by equally expressive guitar-playing. It is the rare performer who can, in one moment, address with insight and sensitivity the issue of racism...and in the next, demonstrate her witty sense of humor...". Jim Watson, Coffeehouse Off the Square, Hingham, MA "Her activist's voice comes through in song..." The Boston Globe "Genuine, heartfelt songs....Classic folk!" Club Passim, Cambridge, MA "Patti's stage presence is so natural it is like she was born there." National Guitar Workshop Background: Patti DeRosa started writing songs as soon as she got her first guitar when she was thirteen years old living in Long Island, NY. She and her guitar became inseparable, and she started performing in high school and throughout her college years in the New York area. She moved to Boston to pursue her graduate studies in social work and African American studies, and continued to be a frequent performer in the Boston and New York folk scene. At one point, she even put down her guitar for the steel drums, as her love of Caribbean music and culture lead her to join the Boston-based Metro Steel Orchestra, where she played 'pan', sang, and even did the limbo. Patti took a long hiatus from the music world to dedicate herself to her passion for social justice. She is the founder and president of ChangeWorks Consulting, which helps organizations and communities work towards diversity, social justice, and equity. But the draw of her music was too compelling, and Patti has picked up her guitar and is back performing again. Her first CD, Paradise, was released in January 2005 and is receiving airplay on radio stations across the country. She is a performing member of Indiegrrls, Go Girls Elite, SongsAlive Elite, Just Plain Folks, and the Rhode Island Songwriters Association. She has opened for artists such as Vance Gilbert, Lisa Moscatiello, and Terence Martin, and was selected to perform at the 2006 South Florida Folk Festival.

Here's what you say about
Patti Derosa - Paradise.