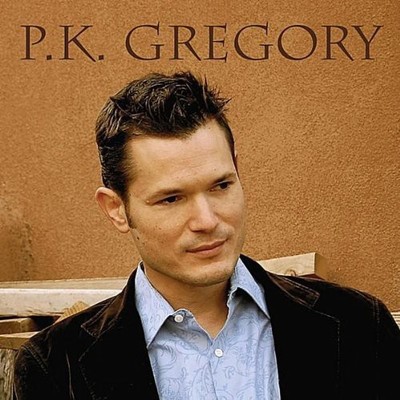 Born in Alaska, reared in the Midwest, and turned loose in Scandinavia in his teens, P.K.'s life has been one of contrasts. 'Saved' from a strictly Bible-Belt upbringing by his family's move from Oklahoma to Stavanger, Norway when he was 13, P.K. learned early on that home is a state of mind. Having spent much of his Midwestern childhood either at the family hi-fi listening to his parents' collection of Eddy Arnold records, or at his mother's elderly piano, bonking out one-finger melodies, it was in Norway that all that which rooted in the early years began to send up it's first tentative shoots. Having managed to wrangle a cheap nylon-string out of his parents after an extensive begging campaign, the budding artist immediately penned his first song, a somewhat premature lament on the perils of overwhelming success, titled "Lonely At The Top". Of course, one could be forgiven for thinking there was nowhere to go but down. By the age of 14, P.K. knew that he wanted to be a songwriter. After graduating from Stavanger American School, he immediately returned to the U.S. and landed a gig playing bass in a Dallas, TX-based hair-metal band called "Ghost Town", unfortunately better known for the quantity of their hair than for the quality of their metal. After that experience, the young writer turned more-or-less inward for a number of years, focusing on honing his songwriting while attending the music school at the University of North Texas. Upon graduation, he moved to the Arizona desert and, for all intents and purposes, dropped from view. Fast forward a few years, and the slightly older P.K. Gregory emerged; reborn and repurposed, with a fistful of songs, a mortgage, and a new baby. Realizing that the challenges of young fatherhood and domestic responsibility were nothing compared to the pain of having to later explain to his daughter why he never pursued his dream, he entered the studio in the fall of 2009 to record his debut album. About the music: Recorded in Santa Fe, New Mexico, at Stepbridge Studios, P.K. Gregory is the opening statement in a conversation about life, love, and the nature of loss. The instrumentation leans toward the classic sounds of vintage country/rock; Dobro and acoustic guitar, accordion and B-3 organ. But this isn't a mere rehashing of the past. Writing from a more personal perspective, P.K. rarely relies on easy sentiment: "So you want to be a big radio star / buy a big house and move out of your car?" he wryly asks in the opening track, and goes on to explain, "Life isn't fair / Man, I don't even care / Just want to live until I die", in an anthemic chorus that will ring in your ears long after the final fade. There are no throwaways here; each song leads to the next with new surprises along the way. Informed by a somewhat iconoclastic mindset, P.K.'s songwriting is uniquely his own. Which is not to say this is a "difficult" or "challenging" album, quite the opposite. P.K's honest and unadorned baritone and primarily acoustic tonal palette, combined with a gentle touch in the studio, can make for a relaxing listening experience - but this is not to be categorized as "easy-listening". P.K. is an artist with something to say, and this album rewards the attentive listener.

Here's what you say about
P.K. Gregory - PK Gregory.