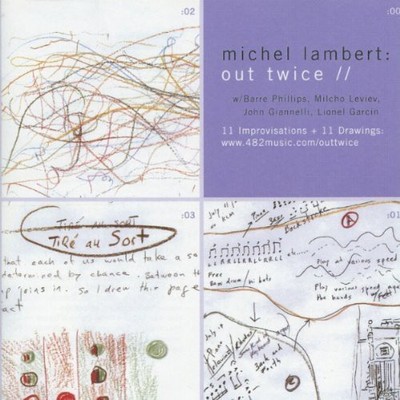 Born to a family synonymous with classical music in his native Québec, Michel Lambert studied drums and composition at Boston's Berklee College of Music, attended workshops in Paris and studied privately with Dave Liebman and Misha Mengelberg. His first professional engagement was with Milcho Leviev's trio in 1983, and since then he has recorded extensively and performed throughout Canada, the United States, Europe and Asia with musicians like Gary Burton, Dewey Redman, Kenny Wheeler, and Uri Caine among others. A self-taught visual artist, Lambert was awarded a commission to illustrate a 4-CD Canadian compilation to celebrate the 50th anniversary of the United Nations. Excerpts from his collection of 366 short orchestral works based on his own drawings, entitled 'Les Journal Des Episodes,' were premiered by the Winnipeg Symphony Orchestra in 1992. Recorded at Denton Studio, Los Angeles, CA, February 24, 2002; and at Studios La Buissonne, Pernes Les Fontaines, France, April 29, 2002 Sponsored in part by the Canada Council, this recording is a collection of 11 spontaneously improvised pieces using Lambert drawings as graphic scores, each seeking to combine visual and musical expression into a single, cohesive language. Named after the trips to Los Angeles and Pernes Les Fontaines, where it was recorded in two sessions, Out Twice was conceived as a combination of Lambert's two loves, the artwork he has created since he was a child and his extensive background in formal music composition and improvisation. 10 of the 11 tracks are first takes done without rehearsal, documenting the musicians' initial reaction to the artwork and the mix of visual cues, written notation, and spontaneous musical interaction. Lambert likens the process to cartography, and the use of a graphic map to collectively seek routes, directions and paths through a shared landscape. The unified result features Lambert with pianist Milcho Leviev and bassist John Giannelli on five tracks, with the other six performed by a trio with bassist Barre Phillips and saxophonist Lionel Garcin. The drawings used for the sessions can be seen at 482Music.com/OutTwice Musicians: Michel Lambert (drums), Milcho Leviev (piano {1,4,7,8,11}), John Giannelli (bass {1,4,7,8,11}), Barre Phillips (bass {2,3,5,6,9,10}), Lionel Garcin (saxes {2,3,5,6,9,10})

Here's what you say about
Michel Lambert - Out Twice.