Nash the Kid - Our Broken Home 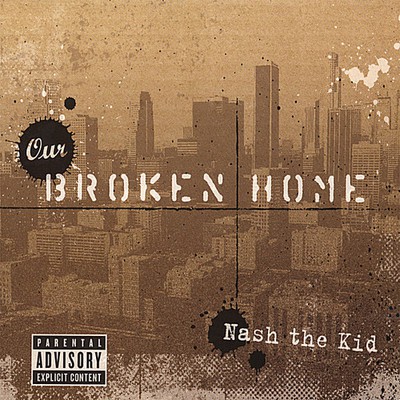 Nash, born and raised in Thousand Oaks, California, grew up listening to Bob Dylan, Cat Stevens, and other singer-song writers. He began writing poems and short stories at the age of 10, which helped sharpen his ability to write lyrics at an early age. However, it wasn't until he was in junior high that Nash found his true calling. Influenced by hip hop and the likes of Dr. Dre, Warren G, Domino, A Tribe Called Quest, and De La Soul, Nash began to develop his talent for rapping. Life at home was hard, so after completing high school early, Nash moved to Tahoe where he bought his first drum machine and sampler. While in Nevada, Nash immersed himself in the underground hip-hop scene. Listening to MC's like Aceyalone, Blackalicious, Black Star, and anyone else he could get his hands on. It was at this stage of his career that Nash started focusing on delivery techniques and, as he puts it, ' the dynamics of a true lyricist.' After living in Tahoe, Nash moved back to his hometown, Thousand Oaks, and began rapping with friends calling themselves Fantastic Planet. Nash honed his stage presence by studying how to read the pulse of an audience. Fantastic Planet performed shows throughout Northern and Southern California, building a strong local reputation for themselves before separating. Nash now had the skills to emerge as the front man of an 8-piece hip-hop band called the Flynn. With the Flynn, Nash performed with the Kotton Mouth Kings and kept busy with shows at the Ventura Theatre, The Whiskey, The Soho, and a host of smaller bars throughout the Southland. When the Flynn disbanded, Nash began working exclusively with Kitchen Works Productions (KWP). The label's owner/producer, Jeremy Hanlon, had developed his own accomplished musical resume working on tour with the Wu Tang Clan, Hot Wire, and several local artists currently on his label's roster. Says Jeremy, 'I saw something special in Nash's hunger to be on top. Just the level he would take it to, to work hard to get there, I knew he was really dedicated to this.' Linking up with Cracked Slab Productions, Nash and KWP have released their debut album titled 'Our Broken Home' comprising 15 eclectic tracks which blend rock, folk and R&B with a distinctive hip-hop delivery. Nash can also be heard live throughout California fronting his new band 'Midnite Theory.'

Here's what you say about
Nash the Kid - Our Broken Home.