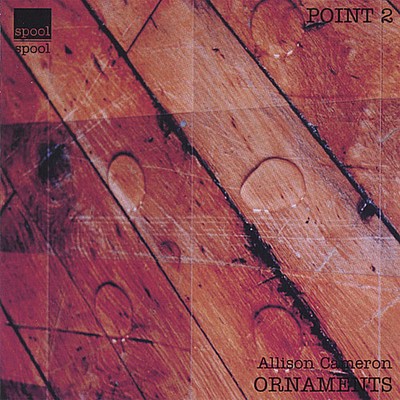 Allison Cameron, toy piano, acolyte bells Colleen Cook, clarinet Carol Fujima, violin Margaret Gay, cello Eve Egoyan, piano Gary Kulesha, conductor Marc Sabat, violin Stephen Clarke, piano, Stein forte-piano. Ronda Rindone, bass clarinet And indeed this music has the radical openness, the lack of boundary, the myopic detail (eschewing grand, overarching gesture), the (perhaps subtle) intricacy (...), and the particularity that I've ascribed to the idea of ornament. ... I think Cameron's pieces are ornaments, ornamenting a music that is inaudible, that Cameron doesn't need to write. For me, Cameron's work suggests a denser construction flowing somewhere beyond/beside/before/behind the sounds she has activated. Martin Arnold One of Canada's most talented young composers ... Kyle Gann, The Village Voice What the critics are saying: The second CD entirely devoted to the music of Canadian composer Allison Cameron picks up where the 1995 Raw Sangudo had left. Ornaments presents four works written between 1996 and 1999, all recorded in August 2000. The title brings to mind ideas of luxurious details, endless ramifications and an accumulation of superficial additions. This music is all the contrary. The title track, a duet for violin (Marc Sabat) and piano (Stephen Clarke), is made of delicate stripped-down nodes of music. Short strings of pizzicato notes hang in mid-air, the ornaments of an unheard melody. While an ornament usually calls for something with a greater purpose (what is ornamented), in this case the superfluous stands alone. A similar sparseness is found in the three movements of Retablo, for clarinet, violin, cello, piano and toy piano/bells (the composer performs the latter pair). A slow piece, very stripped-down once again, it is a beautiful aggregation of singled-out events, a slow-motion funeral march in which every detail becomes crystal-clear. One thinks of George López or even Klaus Lang, although Cameron does not focus on textures. The two other works are less striking. A bass clarinet solo (performed by Ronda Rindone), Somatic Refrain explores the whole range of the instrument, from the raspy grunts at the beginning to ethereal high notes, but it runs long. Three Shapes of the Sword is a triptych for solo prepared piano, here a modern reproduction of a Stein forte-piano. Clarke¹s performance is quite convincing and Cameron's spacious writing allows a lot of room for the instruments sonorities (both natural and altered) to shine. Those interested in Morton Feldman¹s use of space will have no problem to relate to this music. Francois Couture, All Music Guide Allision Cameron Allison Cameron has studied composition at University of Victoria, York University and with Louis Andriessen, Gilius van Bergeijk and Frederic Rzewski, amongst others. She has received many commissions in Canada, the US and Europe. She is currently the artistic director for Arraymusic and has been extremely active in the new music scene in Toronto. She has a previous CD with XI Records of New York as well pieces on CDs on CRI and Donemus Composers Voice of the Netherlands.

Here's what you say about
Allison Cameron - Ornaments.