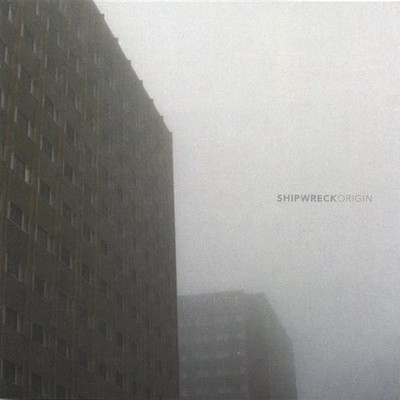 These sounds are panicked. They are dry-mouthed and desperate, and perhaps this is the reason many are likening the sounds of Shipwreck to desert landscapes. Is it a certain open-ended barrenness? Or is it the simple, uncultivated space curated by the desert image that fits so well? Perhaps both, perhaps neither. More accurately, these are the developed cries of desperate hearts. There is emotion here, but it is buried, far from sleeves, buried in crumpled notes on hotel stationery, in empty bottles of blush wine, in bloodshot eyes and the broken remnants of ships-in-bottles, in the wind passing on the straight north-south highways through Illinois. When we last left our heroes (anti-heroes?) the culmination of their influences was battling for precedence in the band's grand musical scheme. Their Six Buttery Mega-Hits E.P. stood strong if not scatterbrained, it's product shifting from acoustic to electric at a pin-drop, scratchy vocaled as a result of a closet masquerading as a recording booth. The E.P. built promise, foundation, and boasted what are still some of the band's best songs. Now, with the band's first full-length, Origin, we find Shipwreck gentrifying it's members' influences, effectively fitting the pieces of the puzzle together. The word of the moment becomes 'cohesion,' both literally and structurally. The full-length format, which normally allows for expansion on a good day and solidification on a better day, yields both. Harman Jordan's eclectic country-tinged folk influences ranging from Gram Parsons to Will Oldham are reflected in his frighteningly apathetic tone and fingerpicking inherited from hours of listening to albums by Bert Jansch, The Byrds and Clarence White. John Owen's explosive Jesus Lizard and Pixies influences seep through with dirty, abrupt guitar hits. John's vocals have been compared to a 'bastard child of David Byrne and Ian Curtis,' his sharp delivery standing out as a foil against Harman's drawl. Together their lyrics represent modern nursery rhymes, complete with the darkness, often disguised by the light. And finally, last but not least, off-kilter rhythms built by Chris Waage (drums) and Vladimir Brilliant (bass) provide a certain architecture to all of this, creating a backbone with apropos timings, maintaining structure all along. Shipwreck is no longer a band of four pieces. Shipwreck, now, is an abstract for a future; an even stronger foundation. Lyrically, Shipwreck has never been tighter, the result of a conscious reinforcement between the band's songwriters. Despite stylistic difference, Origin finds Harman and John playing off one another's lyrics, creating ties between songs, surreptitiously bonding songs for cohesion extending far past that of the band's musical growth. Origin is of a subtly cyclical nature; on repeat, the record has no beginning, no end. Or, perhaps more coherently, does not simply begin as a means to an end. The product of three intense months of songwriting in late 2004, Origin was produced by Jordan Schultz and the band at North Branch Studios in Chicago in January 2005. Formerly defined by a joke of a moniker (self-imposed, mind you), 'sub-aquatic astro-punk,' that once so perfectly categorized the band's sprawling musical personality, one finds with Origin that Shipwreck is no longer sprawling. Perhaps the record finds a farther reach, but there is no strain. Shipwreck, it seems, has been exercising regularly. The result is one of Pavement-esque non-chalance, of complicated chord structure and an effects-heavy outward thinking that can only recall Radiohead, of unequivocal personal vision. Yet still Shipwreck's sound remains perhaps most reminiscent of a desolate Midwest, with words full of tales that could have happened anywhere but here (making the band's name all the more apropos). On Origin we find a record of modernity-instead of vast oceans there are vast corn fields, but there are ghosts in these stories just the same: the ghosts of dreams passed, loves lost, of skeletons removed from closets. --Zack Adcock.

Here's what you say about
Shipwreck - Origin.