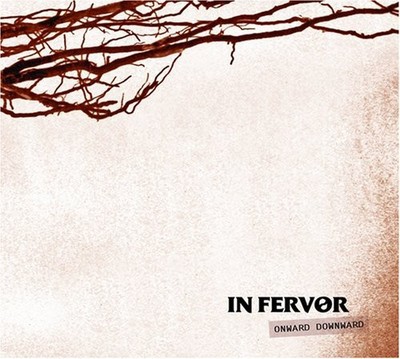 In Fervor makes music. Onward Downward was recorded in New York City, in the borough of Brooklyn to be exact. In their delightfully filthy studio, packed with gear, complete with complimentary buckets of rain water from the less than trustworthy roof, In Fervor toiled, away from hipster hangouts and seducing trends as 2006 came and went. Two pints of blood, a gallon of sweat and forty thousand cups of green tea later, they emerged, pale and under-fed, with the thirteen songs collectively known as Onward Downward. In Fervor makes music. It is music with the intensity of Black Sabbath, the raw emotion of Nirvana and the lyrical earnestness and depth of Nick Cave. It is music, further, that seemingly does not attempt to be anything other than what it is, created as if for it's own sake, charting a course dictated by nothing other than itself, without pretense. What is discovered and unearthed here is limited only by the audience's willingness to not only hear, but listen. And listening, the audience will discover music crafted with passion, layered with roaring emotion and whispered sentiment, created in such a way that each time listening is like the first, a step into ever different waters. Onward Downward is the title of In Fervor's latest trip, simultaneously unique and familiar, personal and universal, with thirteen embedded journeys, each in their own right, each as part of the whole. The searing opener of Ground to Air pushes forward and pulls us in like one in search of an answer to an urgent question, through lonely valleys and mountainous highs like the whole album itself. We encounter the musical expression of a lyrical tangle of loss, overcoming, resolve, doubt, anger, fear, sorrow, strength, and triumph. From the acoustic guitar and cello drawn sympathetic strains of Jesus, to the mournful In The Spirit Of Self Sufficiency that feverishly climaxes as if every last drop of frustration is being wrenched and squeezed until, collapsed and exhausted, nothing is left; from the churchbell crossfade opening of the beautiful voice-driven Seething, to the crushing and triumphant return in Same Waters Twice, In Fervor offers a rigorously honest and refreshingly complex musical maze, without terminus, solution, resolution. It is a sphinx without a riddle, a mischievous collection of clues with no crime, always affording discovery and rediscovery. Onward Downward will stand the test of time because it stays true to it's belief in rock and roll and refuses to treat listeners as anything other than a fellow travelers on journeys of their own; travelers willing to cross paths with others and, if only for a moment, share a joy or a sorrow, an emotion or thought. In Fervor does not want fans of something called a product or observers of a show, but to evoke engagement with the listener. Tom Waits once said that most musicians begin their careers doing poor impressions of other musicians, finding their own voice only over time; Onward Downward gives us a band that has already found their voice. This is not a young band with promise - it is already delivering. - Damian Treffs Something about this album feels incredibly familiar, like stepping into your favorite pair of jeans or, perhaps more appropriately, that flannel shirt in the back of your closet. In Fervor is nitty-gritty basement rock that sounds more '90s-alternative than most of what Brooklyn's been emitting these days. Like all grunge/post-grunge bands, the droning, rusty, and somewhat indecipherable vocals are depressive (though certainly cheerier than Alice in Chains) and blend effortlessly, in cloudy and sludgy precision, with guitar, bass, and drums. Metal and classic-rock influenced, guitar solos, subtle harmonies, and thoughtful lyrics provide Onward Downward with a certain seriousness. The songs aren't too formulaic, yet the album flows, from start to finish, in one long breath. 'Jesus' and 'Seething' involve acoustic guitars, while 'In The Spirit of Self-Sufficiency' and 'To No Avail' are hard-edged and powerful-reminiscent of the often overlooked Seattle band, Screaming Trees, who, like In Fervor, are influenced too by a general folk-rock sound. Although it isn't difficult to pinpoint their overall mood or genre, In Fervor doesn't come off as specifically copying other bands. 'Another's Maze' does sound a bit like Metallica's alternative departure, 'Unforgiven II,' but a somber cello and hushed vocals make it very much In Fervor's own. Nothing too shocking or sophisticated, the fast-paced 'Same Waters Twice,' with awesome metal riffs and frantic drumming, closes Onward Downward with an upward gust. - Beyond Race Magazine ________________________________________________________ 'This heavy on instrumentation/experimental album ran an interesting gauntlet of moody alternative and prog rock. The tunes were at the core, intimate yet seemingly powerful at the same time. They grazed a few indy interludes during the album but stayed firmly rooted in the emotion and passion of music. The depressive state of the album may appeal to a limited number of people but I'm sure they won't have a difficult time finding those fans who enjoy the hurt brought about through music. They sort of assimilated themselves to THE RAINCOATS of the 90's alternative era where the basis for their music was for feelings. You could sit back and relax to the tunes or be sucked in by the gravity of tones.' -Brodie Holmen, East Coast Romper ________________________________________________________ 'Following up on their successful Anatomy of a Memory, In Fervor layers thick indie rock creed with giant hooks and spellbinding catchiness. Pop is always in the forefront of their mind though not necessarily in the front of their delivery. Grungy guitars work hard to position themselves deep in the mix while the singer and rhythm section break loose. Good hard-edged alternative rock that has oodles of groove.' -J-Sin, Smother.

Here's what you say about
In Fervor - Onward Downward.