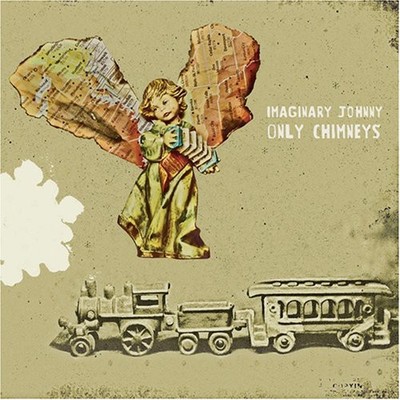 Longtime fans will recognize the distinctive imagistic songwriting, and will discover a warmth and cohesiveness. There is a newfound fullness to Imaginary Johnny's sound, with brass, strings and a choir of sorts. Only Chimneys is no less personal than the recordings that preceded it, but it is also epic, portraying an America struggling with it's place in the world: broad yet territorial, vulnerable yet defiant, modern yet ancient. Only Chimneys pays tributes to it's forbearers with an almost folk-like disposition and a near-constant dialog with the past, but never stops asking where we go from here. * * * Praise for 'Only Chimneys': 'Brooklyn's own Imaginary Johnny will release their third full-length, 'Only Chimneys,' this April. Impeccably produced by Joel Hamilton (Lou Reed, Justin Timberlake, RJD2), this album just could be what this band needs to finally get their fifteen minutes. Originating in Kansas City, it comes as no surprise that their sound elicits memories of The Get Up Kids and other Midwest emo bands of the early part of this decade. Carried by tinkering-piano melodies and a drum kit, their dreamy sound is spandex-tight, but not to a fault. Front man Stuart Wolferman's voice, like a lake upstate on a warm July afternoon (think Clean and Clear, not East River), draws comparisons to Granddaddy's Jason Lytle with perhaps a bit more of an edge.' [THE DELI] Praise for 'Painting Over the Dirt': 'In 'Work Related', IJ showcases his venerable story-telling talents with the heartbreaking tale of a man forced into exile after one incident. 'Work Related' brings a nouveau element to the outlaw's tale, as this post-NAFTA drama unfolds on top of a lo-fi backbeat.' [TRAMPOLINEHOUSE.COM] Praise for 'The Upside of the Downside': 'If the debut from Imaginary Johnny is any indication of what's to come, Belle and Sebastian best be watching it's back. Muffled broadcasts and tweaked-out squiggles peg lyrics about instant coffee, tropical rain storms and purple-clad prostitutes. Wolferman's summery ballads flutter past like sweet visions of rose colored icing on a three-tier wedding cake ... The commentary on love, loss, and New Orleans never grows tiresome.' [MAGNET]

Here's what you say about
Imaginary Johnny - Only Chimneys.