Brett Larson - One of These Roads 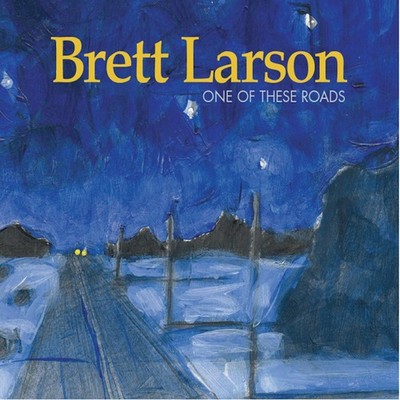 Songs tell tales of heartache, family, and Minnesota winter House of Mercy Recordings announces the release of "One of These Roads," a collection of 11 new songs by Minnesota singer/songwriter Brett Larson. Songwriter Brett Larson sings of love lost and found from his vantage point in rural Minnesota on his new release "One of These Roads." The CD is available at the Electric Fetus and online at CD Baby, iTunes and Spotify. The release will be celebrated at Amsterdam Bar and Hall in St. Paul on March 28, where Larson will be joined by singer-songwriter Jon Rodine, local alt-country troubadour Erik Brandt & the Urban Hillbilly Quartet, and bluegrass band Pocahontas County. The collection showcases Larson's songwriting, which has been featured on two previous House of Mercy Recordings as well as the 2013 CD "Driftin' Along" by the Blood Washed Band, a group composed of some of the Twin Cities' top alt-country musicians, including several who contribute their talents to "One of These Roads." The trademark themes of drinking and salvation from Larson's previous releases are only hinted at in these songs, but his self-deprecating humor is present from the haunting first track. "Haven't hit the bottom - since the last time," Larson confesses, ending with the same sober realism: " I'll never fall again - until the next time." "Up Here on the Border" is a frigid ode to Minnesota: "Up here on the border, the snow is moving in. There ain't nothin' colder than a howlin' border wind." Love of family is the theme of "Bring You a Highway," "You Will Be My Spring" and the title track, "One of These Roads," a folk song about pining for a wandering lover. Other songs range from country tear-jerkers "I Was Wrong" and "When You Fall" to the spiritual "Going Home" (complete with gospel choir), to the alt-country "My Broken Heart" and "My Town Now" to the rootsy, up-tempo "Dead End Road" where Larson's sense of humor is again on display: "Keep going straight, don't turn my way, I'm a dead-end road." Larson's unpolished vocals and understated guitar playing complement the deceptive simplicity of the songs. "I like simple songs because they're the only kind I know how to play," Larson quips. As influences, he cites Sunday night sing-alongs at church, a love of country music that started with Hee Haw and the Glen Campbell show, and teenage visits to the Coffeehouse Extempore in 1970s Minneapolis. Larson sings solo or with minimal accompaniment on four of the songs and is joined by a strong group of Twin Cities musicians on the rest, including guitarist Dave Strahan (Romantica, Farewell Milwaukee), bassist Quillan Roe of the Roe Family Singers, fiddler and mandolin player Jake Hyer of Pocahontas County and other groups, and vocalist Angie Talle. The CD was produced by Erik Brandt of the Urban Hillbilly Quartet, who plays keyboards on the CD, and recorded by Levi Stugelmeyer, who plays drums. The recording is the third by Brett Larson on the House of Mercy Recordings label. The first was "All the Way Wrong," a collection of gospel and whiskey flavored honky-tonk songs. Two of the songs, "Pour Me a Whiskey" and "He Will Take You Back Again," were covered by The Blood-Washed Band in their 2013 release "Driftin' Along." The Blood-Washed Band CD also features two songs from Larson's second release, "Blood of the Faithful": "Waitin' for the Creek to Rise" and "Where the Sinners Are." Both CDs are out of print but will be re-released in 2014.

Here's what you say about
Brett Larson - One of These Roads.