Abi Tapia - One Foot Out the Door 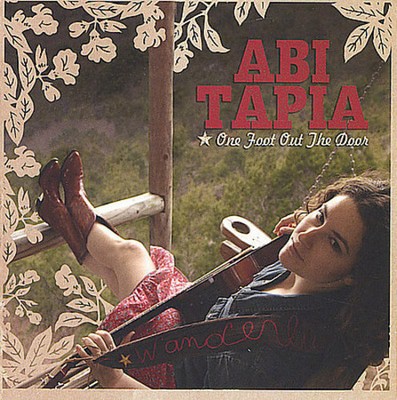 The new CD from Abi Tapia is here! Produced by Chris Gage at his MoonHouse Studio in Austin, it features 12 new songs about love, leavin', and coming home. The creation of this music has been a year-long road trip with Abi (vocals, guitar and harmonica) driving and Chris Gage (producer, engineer, guitars, keys and vocals) sitting shotgun with the maps. They picked up a few hitchhikers along the way including Glenn Fukunaga (bass), Paul Pearcy (drums), Eamon McLoughlin and Kym Warner of The Greencards (violin and mandolin), Mike Hardwick (steel guitars), and Brittani and Tiffani Ginn (harmony vocals). These musicians have contributed to albums from the Dixie Chicks, Eliza Gilkyson, Jimmy Dale Gilmore and countless others. Abi Tapia happily calls Austin home, but to say she's simply a Texas songwriter wouldn't give the whole story. The daughter of musicians, Abi was born in Alabama and lived until she was fifteen in various towns around the Southeast and Texas. She has since lived in the Midwest (where she was a Sociology major at Grinnell College) and New England (where she began her professional music career). Characteristics of all of these regions inspire Abi's songwriting: The inviting warmth of the South, the expansiveness of the Midwestern Plains, and the pluck and determination of a New England Yankee. Perhaps it is because she's lived so many places or maybe it's just some innate wanderlust, but Abi has never been deterred by the enormous undertaking involved in heading out solo for a cross-country tour. Driving hours by herself, living out of the car for weeks at a time, and playing for strangers in each new town, she is fed by the thrill of exploring new places, meeting other artists, and the blessing of having audiences applaud her everywhere she performs. Even while living in Maine, Abi found herself attracted to the sweet twang and straightforward approach of Country music. This sound drew her to Austin in 2002 where she quickly rooted herself in the city's thriving live music scene. With it's blend of country sincerity, cosmopolitan irony and plethora of skilled pickers, this openhearted music community is the perfect setting for Abi's work. In Austin she has found the time, inspiration, and support to write lyrics that are at times simple and sincere, but can turn sassy in a flash; and her songs seem pre-destined to be surrounded by licks on mandolin and Dobro. As host of the Cactus Café's Monday Open Mic night, Abi sits on the front lines of the emerging songwriter scene, welcoming new musicians to town every week, hoping they find Austin as hospitable as she has.

Here's what you say about
Abi Tapia - One Foot Out the Door.