Rick Ruskin - Once Upon a Time 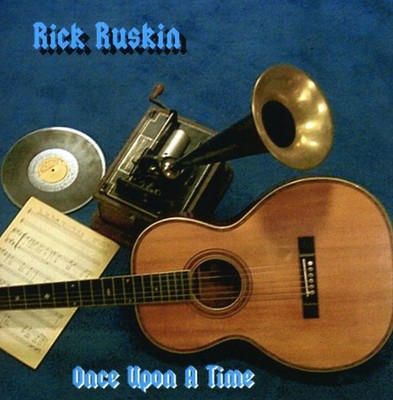 Rick Ruskin started playing guitar in 1962 and in just one year became a respected professional musician in his native Detroit, Michigan. In 1964, while still in Jr. High School, he was chosen to open the bill for the Reverend Gary Davis at Detroit's legendary Retort Coffee House. This engagement resulted in a fast and permanent friendship with the master blues, ragtime, and gospel guitarist. Rev. Davis was so taken by the young Ruskin's skill and eagerness, that he invited Rick to spend that summer with him at his Long Island home. By the end of the summer, Davis stopped teaching Rick new material and told him, 'It's time you started paying attention to your own music.' Ruskin has been doing that ever since. Rick Ruskin's achievements as a musician and composer are many and varied: Original Compositions and/or Arrangements Used By: Mel Bay Publications A&E Network ABC-TV NBC's-TV Hewlett Packard Second Story Television Armand Hammer Productions TEAC Corporation of America Fostex Electronics James B. Lansing Sound BACK-UP CREDITS: Lead Guitarist for Jackie De Shannon Acoustic Guitarist for Olivia Newton-John Rhythm Guitarist for Tanya Tucker Jeremiah Johnson soundtrack A Boy and His Dog soundtrack Kid Blue soundtrack Composed the film score for American Film Institute's, GATLIN AND THE BOY RECORDINGS: Once Upon A Time, Lion Dog Music Words Fail Me, Lion Dog Music Turn the Page, Beachwood Records Against Tradition, (with Karen Leigh Williams) Soundboard Music Sounds Familiar, (with Lewis Ross) Revere Records Songs, Hymns and Carols, (with Lewis Ross) Revere Records On The Cheap, (with Lewis Ross) Lion Dog Music John Fahey Visits Washington, D.C., Takoma Records Six String Conspiracy, Takoma Records Christmas with John Fahey: VOL.II, Takoma Records Microphone Fever, Takoma Records Richard Ruskin, Takoma Records INSTRUCTIONAL VIDEOS & BOOKS: Words Fail Me - The Complete Transcriptions, Slice Of Life Publications The Takoma Sessions, John August Music/Mel Bay Fingerstyle Groove Guitar, Video Progressions Acoustic Fingerstyle Guitar, Video Progressions Fingerstyle Christmas, VOL. I, Video Progressions Fingerstyle Christmas, VOL. II, Video Progressions PUBLISHED ARTICLES: Acoustic Guitar Magazine Fingerstyle Guitar Magazine FRETS Magazine A SELECTED LIST OF PLACES RICK RUSKIN HAS PERFORMED: The Occasional Cafe - WA Coffee Gallery - CA Boulevard Music - CA The Fret House - CA Temecula Art gallery - CA McCabes - CA Freight and Salvage - CA The Ice House - CA California Traditional Music Society - CA UCLA - CA USC - CA UCSB - CA U of M - MI Wayne State University - MI Chaps - MI Elderly Instruments - MI Portland Guitar Society - OR The Rose Festival - OR Oregon College of Education - OR Western Washington University - WA University of Puget Sound - WA University of Minnesota - MN Monroe Center Coffee House - WA The Backstage - WA The Crystal Star - WA The Epicurean - WA The Antique Sandwich - WA Still Life Coffee House - WA Bumbershoot - WA Folk Life Festival - WA Museum of History and Industry - WA What Reviewers Have Said About Rick Ruskin: 'Sometime in the mid 90's, I got three instruction VHS tapes of Rick Ruskin. I recently bought two of his CD's off of itunes and he is truly awesome. ....Rick Ruskin's music, while guitaristic with things like hammer ons and bends and so forth -- technique is always secondary to the music. You could compare him to Pete Huttlinger in that regard. I have played for about 25 years since I was a teenager and just in the last few years, I feel my own playing has improved because I have concentrated on musical phrasing -- playing loud notes loud and soft notes soft and shaping a phrase to fit the music. Rick Ruskin's music is a great example of how sometimes it's not how many notes you play but how you play them that makes the difference between art and crap. Do yourself a favor and check him out.' (Posted on the Unofficial Martin Guitar Forum -UMGF.COM) '... In these days of all the high-energy slaps and electronics effects, it is most rewarding to find an inventive guitarist who can deliver the guitar in the original steel and wood sound.....Amazing talent' (VICTORY MUSIC REVIEW) '...so brilliant at times that he seems to transcend normal approaches to the guitar....Ruskin may be the smoothest technical player around. Flashy, fast, inventive and musical and that isn't easy.' (GUITAR PLAYER) '...a standout guitarist...' (BILLBOARD) '...the detail and precision of Ruskin's playing are well known among fingerpickers...' (GUITAR PLAYER) '...He has impeccable technique and the good taste and sense to know that merely showing off technical wizardry can be deathly boring.' (MILWAUKEE WEEKLY) '...one of the best finger-style guitarists in the country...' (FOLK SCENE MAGAZINE) '...Ruskin's touch is peerless, his playing is flawless...' (ARTS MAGAZINE) '...he is one of the most refined and expressive guitar players I've heard...Ruskin has enjoyable stage presence...' (DON CREERY - WESTERN WASHINGTON UNIVERSITY) '...Ruskin creates some of the most beautifully toned guitar solos ever heard...' (SAN DIEGO NEWS PRESS) '...Ruskin is one of the finest people I've heard in a long time. His vocals come across with ease and a brilliance that brings to mind Cat Stevens...As a guitarist, he is unbelievably great. The man has a style that makes each song new and exciting to listen to...' (TOM WILBERING, WMHW-FM) '...Though I have nothing against Leo Kottke, 'the greatest folk guitarist on earth does seem a bit overstated. I suggest you listen to Steve Goodman, RICHARD RUSKIN, Merle Travis, Doc Watson, Chet Atkins, William Ackerman or Fred Epping before you crown the King.' (PEOPLE)

Here's what you say about
Rick Ruskin - Once Upon a Time.