Scrappy Hamilton - Once or Twice Every Thousand Years 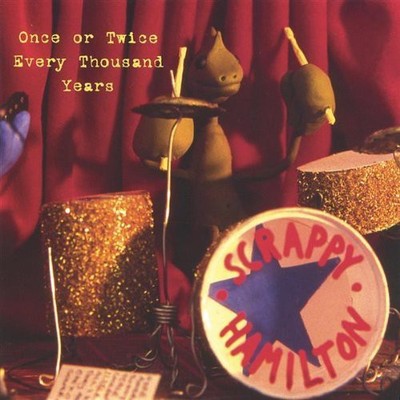 Scrappy Hamilton has been a hard working, road doggin' band since they first formed in the summer of '99. After building an enthusiastic hometown fan-base in progressive Asheville, NC, they soon moved on to a steady touring circuit reaching from NYC to Austin, TX. Scrappy has performed for thronging audiences and built reputations & relationships with many well-known venues and performers. Indeed, it has been their unique and infinitely evolving sound combined with their memorable performances that have kept their crowds multiplying and their opportunities flourishing. Their eclectic style has had them aptly billed with a bizarre, yet appropriately wide range of talent. They have shared the stage with bands like the Moldy Peaches (NYC), the Asylum Street Spankers (Austin TX), Town Hall (Philadelphia, PA), the Squirrel Nut Zippers (Chapel Hill, NC), the Rebirth Brass Band & the New Orleans Klezmer All Stars (New Orleans, LA). Clubs like CBGB's (NYC), Smiths Old Bar (ATL), Tipitina's (NOLA), & Gruene Hall (TX) have become old haunts for these guys. In addition, they have released 2 diverse albums ('AtRock Bottom'1999 & 'Stay on Target'2001) and one EP ('Unique'2003) since their inception six years ago. Scrappy's live performances & original songs have received countless accolades. Their song 'Wastin' Time' appeared on the soundtrack of the 2004 movie 'Cabin Fever' (Lions Gate Films). They have performed live on Fox News Atlanta and were awarded first place at a 2002 Battle of the Bands hosted by the Grammy Foundation. Scrappy Hamilton has now completed their third album, 'Once or Twice Every Thousand Years', released in February, 2005. As with the others, this work is a true evolution from it's predecessors, illustrating a maturing artistic dynamic with a timely sound. It's poetic message resonates with the struggles of our modern world in rock-laden songs of love, war and tyranny. Scrappy Hamilton recently relocated to sunny Los Angeles, CA. With plans for extensive West Coast tours, they have hopes for the continued broadening of their fan base and the discovery of new frontiers in their musical depth. 'Scrappy have reinvented themselves in the last few years, turning themselves into an influence chasing, hard-to-define style of rock. [ their music is] Marked by talent, smarts and uncanny musical flexibity...' -Steve Shanafelt, Mountain Xpress.

Here's what you say about
Scrappy Hamilton - Once or Twice Every Thousand Years.