Quactus - Once A Pond, A Spine 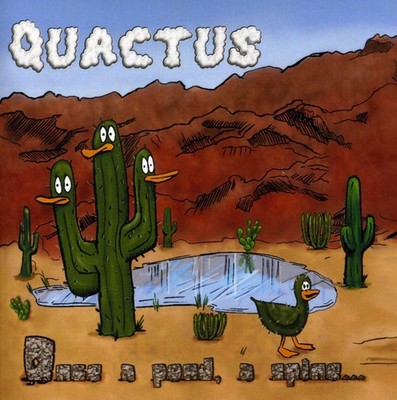 Quactus' debut album, "Once a pond, a spine..." brings together the classic sounds of the jam band genre with the band's own blend of varied influences, skilled musicianship, intense jamming, and crisp vocals. The self-produced and recorded album from the Los Angeles-based group features a range of musical styles, including rock, blues, jazz, funk, latin, rockabilly, prog-rock, and psychedelic. Tracks such as "Umbrella" and "Mine All Mine" will relate to a wide audience, while prog-rock laden epics such as "The Journey", "Fantazor's Escape", and the instrumental tour de force "Van Winkle's Dream" will appeal to cerebral listeners. "Might Be You" and "Alligator" both feature the band's cohesive improvisational style, which will please jam-band minded listeners. Bryan Rodgers - HomeGrown Music Network Review 11/19/08 Quactus makes no quacking bones about it - they draw inspiration from the biggest jam bands of our generation and beyond. If you're looking for a disc that emulates the touchstones of the genre, like harmonically intertwined guitars, open-ended jam segments, and sudden shifts in mood and tempo, then you could find a keeper in their debut, Once A Pond, A Spine. Quactus dives headfirst into all of these influences and more, embracing the nuances of the form by dotting their setlists with covers from expected (Phish, Zeppelin, Dead) and unexpected (Bell Biv Devoe, Ray Parker Jr.) sources, and religiously keeping setlists updated on their website. The album highlights their original tunes, which run the gamut of tried-and-true psychedelic vehicles, like the simply endearing funk-rock crunch of 'Fever Boy.' 'Van Winkle's Dream' incorporates further prog-rock and fusion influences into a triumphant instrumental excursion that bounces between sections heavy with notes and others with a gliding improvisational feel. The gently swirling 'Them' soothes the ravaged mind with circular vocals and a genuinely pleasant groove. The album has a flow that is apprent, as 'Umbrella' strides out of the mist with vocals and understated music that remind me of Keller Williams' recent band projects - eloquently simple rock rhythms and subtly trippy melodies. The energy rises on the countryfied live staple 'Poinephobe,' which combines dancy funk breakdowns with rip-roarin' verses and typically plain-spoken vocals. 'Mine All Mine' is the disc's most rocking track, exhibiting a distorted, strutting classic-rock vibe with a fierce guitar solo within a succinct time frame. 'Fantazor's Escape' stands in stark contrast, with flighty, hippy-dippy guitar melodies scattering over a propulsive rhythm that drops suddenly into a piano-driven section with mythical subject matter. It's 4 or 5 song ideas in one, featuring sections that could stand on their own. A song like 'It Isn't True' makes one wonder why they don't keep writing such well-constructed, pop-leaning tunes that stand on their own. Once A Pond, A Spine could use a few less minutes of running time, more forceful vocals and a larger helping of the band's concise song ideas - even an overtly fun, simple one-word blues jam like 'Alligator' works better than the overwrought complexity of 'Fantazor's Escape' - but that's not to say that their lengthy creations like 'Might Be You,' 'The Journey,' and 'Van Winkle's Dream' are without merit, and some are very good indeed. Quactus certainly doesn't lack song ideas or the ability to flat-out jam, and I think their fame will grow as they learn to be a bit pickier about what makes it into their repertoire. Bryce Propheter - Flagstaff Live Review 10/02/08 Although the sound and improvisational style of Quactus draws immediate comparisons to other jam bands like Phish, the Grateful Dead, and Umphrey's McGee, other influences that are hidden somewhat deeper within the tracks include the Rolling Stones, the Beatles, Pink Floyd, Led Zeppelin, Metallica and Slayer. These varied interests and influences in music are shared by every member of the band, helping Quactus create music that is uniquely their own. Randy Ray - Jambands Review 05/23/08 Once a pond, a spine..., the debut Quactus album is an obvious pun on the commencement to many fine tales. The band wears a few influences-Phish, the Allman Brothers Band, Frank and, yes, Dweezil Zappa and Umphrey's McGee-proudly on their sleeves on numerous tracks but, what is even more impressive, is that the quartet also writes good hooks, can rawk da funkin' house and certainly show signs of what Gordon [Seth, not Mike] said about the Phish legacy, "the songs are strong pop songs on their own. They just happen to have jamming in it." The band can also PLAY. Weiner as guitar god with three sidemen would have been so easy; on the contrary, all of the band members write solid material and play quite well improvisationally-speaking or not. The evidence: "Might Be You," a curling hook which leads to sweet open jam terrain, "Van Winkle's Dream," a bass-driven bit of guitar wizardry written by Weiner which also evokes some cool 70s prog rock; "Umbrella," a languid tableaux written by Zachan that is also a tight yet playful nugget; "Fantazor's Escape" and "The Journey" are just plain great multi-section adventures with stories to tell, taboot. Listen to the last 80 seconds of "The Journey" and you hear a band fully confident and in control of it's tempo. But it is a trio of songs, "Poinephobe" and "Mine All Mine," written by Gordon, and "Alligator," by Weiner, where the band shows a true bit of original flair as the hooks are memorable, the playing is inspired and the sections lend themselves to open-ended improvisation before the inevitable return to snakebite riffs. "Poinephobe" is the best song not written by Jack White or Luther Dickenson as the blues via the swamps of the South are explored and rendered with whiskey-blurred eyes and classic riffs. "Mine All Mine" is a mean ole ass thrasher-bravado and chutzpah sharing the stage with wicked machismo-and is a welcome bit of unapologetic hard rock-raw, dirty and shamelessly catchy. Another winner from a group to watch.

Here's what you say about
Quactus - Once A Pond, A Spine.