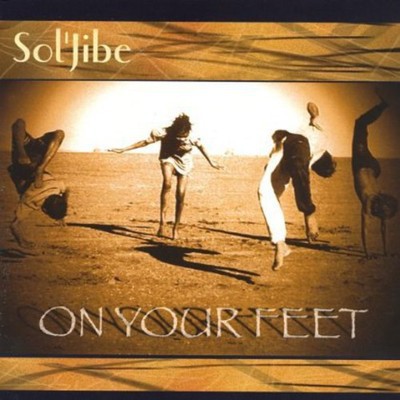 Today Sol'jibe is a band quickly rising to stardom and searching independently for national exposure. Their first album, On Your Feet, has already sold thousands of copies around the United States. Their sound is comprised of acoustic rock, flamenco, and world-influenced rhythms that are driven by the expressive vocals of Snider and the passionate guitar stylings of Merlos. This combination conveys songs of depth and intensity--a cultural blend of different worlds that artistically maintains it's identity.   Snider and Merlos, the two founding members of Sol'jibe, first met when the two were showcasing their musical abilities for a high school talent show. They soon became friends, sharing mutual interests in cultures, sports, hobbies, and most of all, making music. Their first song 'Pinatas,' embodying the differing styles of their musical backgrounds, captured the attention of students, faculty, and local audiences alike. Longing for the opportunity to gain more knowledge, the pair journeyed to the south of Spain to study music with the gypsies. 'Sol'jibe is a refreshing break from the norm...the band puts on a high energy and soulful show which has turned them into a 'must-see' live act.' NorCalTV.  As they perform consistently to full houses, Sol'jibe maintains a strong sense of purpose for themselves as musicians. 'We hope that through our creativity and artistic endeavorswe are  able to bring people together. Music is universal. Our dream is to experience every musical opportunity possible throughout our lifetimes in order to bring people culturally closer in harmony through music.' This attitude has developed partnerships by attracting other musicians with the same ideals.  Other artists such as world Afro-fused style percussionist Cody Remaklus and virtuostic soprano saxophonist Jonathan Phillips contribute to Sol'jibe's diverse flavor.  Sol'jibe has been on two national tours with Rodney Branigan and Seth Horan (formerly of Vertical Horizon), and continues to spread their music amongst the western states. Sol 'Jibe has recently opened up for such national acts as Michael McDonnald at Red Rocks Amphitheater and Dave Kos locally in Reno.  As a band they have gained strong support from local community and radio. This summer, along with being the first local band to head-line Reno's concert series 'Rolling on the River', they were winners of Harrah's 'Search for the Stars' Music Competition. This has allowed Sol'jibe to develop a strong grass roots following as well as perform in Reno's Biggest venues including the Reno Hilton and Harrah's Casino.

Here's what you say about
Sol'Jibe - On Your Feet.