Rob Drabkin - On These Heavy Feet 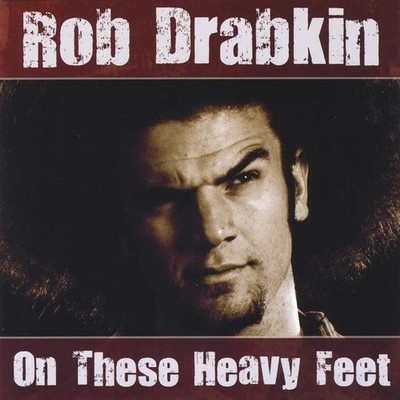 Many people choose music, but for others music chooses them. Rob began playing the electric guitar at age 11, learning note-for-note solos of every Metallica and Guns 'N Roses tune he could find. He moved from metal to jazz when he enrolled in his school's jazz ensemble. Here he was exposed to an array of new artists, rhythms, chords, and most importantly, the beauty of improvisation. Noticing his natural talent for the instrument, guitar virtuoso Ted Reece took Rob on as a private student. Reece introduced him to the acoustic guitar while helping him develop his ear and strengthen his playing. After high school Rob attended Trinity University in San Antonio. Throughout college, Rob maintained music only as a hobby and graduated Phi Beta Kappa in Biochemistry/Molecular Biology and Spanish. His academic aspirations suddenly halted one evening in New York City when it dawned on him he also wanted to sing. Having never sung a note in his life, Rob began spending six to eight hours a day, developing his voice and songwriting skills. With a unique voice, an incredible guitar style, and a handful of original tunes, Rob stormed onto Denver's local music scene, leaving audiences impressed. Within a mere week of open stages, he was offered his first gig at Arvada's D-Note. Shortly thereafter, he was playing to full crowds at Boulder's legendary Fox Theatre and in March 2007 they invited Rob as the main support for their sold-out 15th anniversary show with The John Butler Trio. Over the past three years, Rob has toured across the country supporting long time Dave Matthews collaborator, Tim Reynolds and British band, Back Door Slam. Rob has performed for former President Bill Clinton, Senators Ken Salazar and Bob Hernandez, and Congressman John Salazar and to crowds at The Democratic National Convention in August 2008. His music has been in rotation on Sirius Channel 30: The Coffee House, 93.3 KTCL, 102.3 KCUV and 99.5 The Mountain, and 101.5 The Independent Alternative. 97.3 KBCO has invited Rob to perform in it's world renowned Studio C twice. In his three years on the music scene, Rob has shared the stage with many amazing and talented artists including: Colin Hay, Matthew Moon, Raul Midon, Reed Foehl, The Wood Brothers, Back Door Slam, Katie Herzig, Kevin Mileski, Jim Bianco, Rebecca Folsom, Kate Nash, Nina Storey, Kinetix, Leon Russell, Gregory Alan Isakov, Jessica Sonner, Lucy Kaplansky, Tim Reynolds, Jonah Werner, Vonnegut, The John Butler Trio, Dan Craig, Trace Bundy, Aaron Espe, and The Flobots. A Rob Drabkin show can range from a small club, him on stage solo with his Martin, to a venue such as Boulder's Fox Theatre packed with 300 people, him on stage with a full band, complete with bass, drum kit, keys, tenor saxophone, cellos, a violin, and the occasional accordion. Regardless of the venue or fellow performers, Rob can hold an audience captive, playing a variety of songs from sappy ballads to drinking songs, tossed together with the occasional cover that ranges from Disney to Paul Simon to Nelly. Any Rob Drabkin show is entertaining and his career consistently advances as he gains fans and recognition wherever he plays. Rob is currently in the studio working on a full band album that will be released in early 2009.

Here's what you say about
Rob Drabkin - On These Heavy Feet.