Tony Kaltenberg - On the Wing of the Great Spaceship 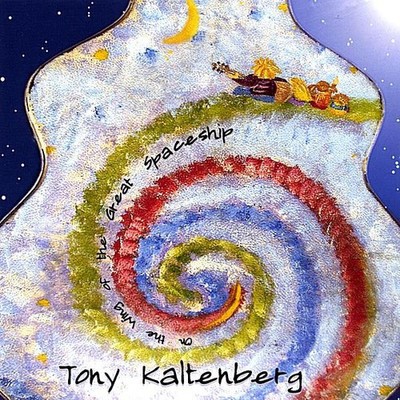 From the wild and misty Oregon coast speaks a powerful voice for the mystical guitar tradition, with roots extending back through the innovative works of Fahey, Kottke & Hedges. Tony Kaltenberg has emerged as one of the most distinctive sounding acoustic guitarists on the circuit. His mesmerizing percussive style has been highlighted on radio programs and performances in diverse parts of the world such as the Northwest Folklife Festival in Seattle, The Oregon Country Fair, Kauai Live, and small venues in the U.S., Germany and New Zealand. In 2000 he released his first album, Spiral Waves, an exciting collection of solo guitar sounds, from sweet, warm finger-styles, to deep, percussive string slaps. On his second album, On the Wing of the Great Spaceship (2004), Tony broadens his enchantment of the guitar strings and explores ensemble arrangements featuring the amazing Michael Manring (former 'Windham Hill' artist) on fretless bass and the gifted Alex Kelly on cello. Although TK shares unique renditions with fair regularity when he performs, he sticks mostly to originals. They are reflections of his surroundings, the people in his life, the ocean where he lives, the yogic lifestyle - music from the core. They are collections of sounds, both very distinctive and full of inspiration from all of his gurus, from Hendrix to Segovia. As a performer, Tony let's the music move his body as well as his soul. He dances the shapes his fingers play, grooving around the stage as he coaxes innovative textures and explosive emotions from his guitar. He slaps the wood a bit, bangs on the strings and teases us with some velvety tenor vocals. He rarely sits unless he has some serious finger-picking to do, and even then it is not for long. ('I love watching him play. He gets his whole body into it. He can come back anytime and share his wonderful gift'. - Sherylin Rawlins - Breitenbush Hot Springs)

Here's what you say about
Tony Kaltenberg - On the Wing of the Great Spaceship.