The American Music Project - On the Bright Side 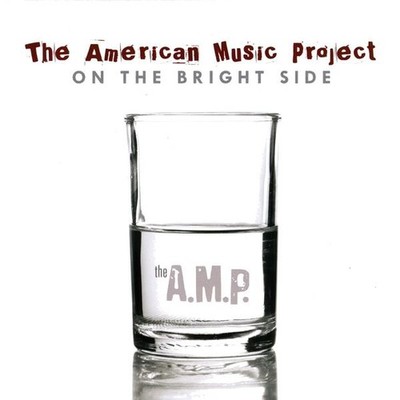 The barrier-breaking brainchild of Motor City urban rapper/poet Dejuan "D Priest" Everett and alto saxophonist/composer Dane Bays, The American Music Project (A.M.P.) brings together the worlds of jazz, hip hop, poetry, R&B, gospel, funk and Motown in an open minded marriage of words and music, wherein each form is represented at it's highest level. Since making it's first recorded appearance on pianist Keith Javors' critically acclaimed ArtistsShare album "The Free Project," the Detroit-based group has evolved into a truly cooperative unit in which each member - D Priest, Bays and Javors, and their colleagues, bassist Dave Ziegner, drummer Alex Brooks and vocalist Curtis Isom - contributes equally to the band's "dialect spinning jazz concepts." "This is our music - American music - Miles, Coltrane, Billy Holiday, Stevie Wonder, Tupac Shakur," proclaims D Priest, during the date's opening track, "Welcome," on which he introduces listeners, emcee style, to the band's individual members and their group's musical outlook. Bays, who was mentored by Detroit's legendary saxophonist Larry Smith and whom D Priest calls "The Jazz Man," explains A.M.P.'s creative philosophy - "We try to meet the non-standard jazz listener half way, by playing music that appeals to a broader audience while maintaining the level of integrity for which traditional jazz is known." D Priest speaks to the group's message of optimism, a conscious alternative to the mindless rage of much modern rap music. "I believe in positive feelings, positive thoughts," he says. "It's the truth and the truth don't stop." With musical antecedents in the revolutionary black jazz of the sixties and seventies, The American Music Project picks up the mantle erected by instrumentalists Max Roach, Pharoah Sanders, Horace Silver and Gary Bartz and wordsmiths Oscar Brown, Jr., Leon Thomas, Andy Bey and Gil Scott Heron, among others. Completely contemporary in it's distinctly modern sound, the group's potency is nevertheless strengthened by it's awareness of the tradition out of which it has emerged and it's undeniable desire to affect constructive change, now. Centered around the rhythmic, rapid-fire rapping of D Priest, A.M.P.'s music aggressively demands attention, while delivering a message that is more positive and conciliatory than that generally heard in rap. This is empowering mind-expanding music for the era of Obama. The title track of "On The Bright Side" is attractive in both it's words and music. Bays' melodic line is broadly appealing and D Priest's call and response lyrics - "On The Bright Side/ You have your dreams/On The Bright Side/You can succeed/On The Bright Side/Just love your life ..." - are infectious in their optimism. The message of "Path of Most Resistance" (words by D Priest, music by Bays) regards the struggle to maintain artistic integrity in a society that is often diametrically opposed to an individual's creative impulses. The A.M.P.'s musical formula is in full flower here, with D Priest's insistent rap instilling tight-wire tension over Bays' relaxed melody, with vocalist Curtis Isom soulful singing offering a soothing respite in his consoling choruses. Bays proves himself to also be a capable lyricist on his "By The Way," a romantic ballad on which Isom convincingly croons the saxophonist's loving words in a vocal style that recalls classic R&B balladeers from Smokey Robinson to Brian McKnight. D Priest's words are back in play on "Forever More," rapping "Through jazz, hip-hop and a funk fusion/It's a revolution, revolution, revolution" and on "Call It What You Want," where he raps "With verbal darts I aim/Hopin' to inflict pain in brains/Inject hope in veins." Bays' beautiful words and music are once again in the spotlight on his "My Past Is Here To Stay." Soul-singing Cutis Isom turns in another moving performance on this romantic plea for just one more chance to keep love alive. The incredible breadth of the A.M.P.'s artistry is in full bloom on "Lonnie's Lament," with D Priest's powerful intonation of his own words to the John Coltrane classic rapped over the band's impassioned playing, with Bays' undiluted saxophone screaming mightily over the relentlessly pushing Javors-Ziegner-Brooks rhythm section. This commanding merger of jazz and rap is what the band is all about and it's message should be felt loud and clear to all after hearing D Priest's call out "To open your mind/I'm about to hit you with a jazzed-out rhyme/Rushin' deep inside your brain/Relievin' your pain." Contemporary in it's flavor, tradition-intensifying in it's scope, the sound of The American Music Project's "On The Bright Side" is one whose time has come. It's goal - to bring the harmonious message of jazz to wider spectrum of largely unaware younger listeners while playing the music with the honesty and passion to which rap claims to aspire but seldom achieves - is much more than laudable, it's essential if jazz is to continue to grow and rap is to reach it's full potential. The first full-length effort by the group should find A.M.P. a receptive audience among fans of all kinds of music.

Here's what you say about
The American Music Project - On the Bright Side.