Ruth Francisco Wilson - On My Way to You 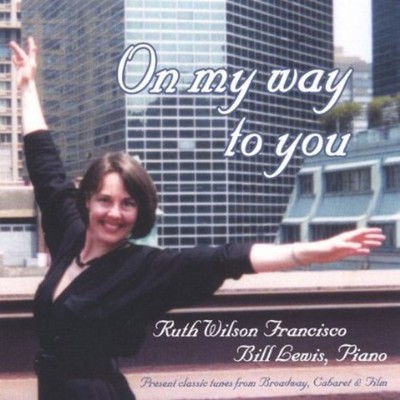 Ruth Wilson Francisco, is a delightfully versatile singer. Whether singing Mozart, Bach, Gershwin, or Rodgers and Hammerstein, she thrills audiences with her beautiful voice and gifted interpretation. While she enjoys singing the standard vocal repertoire, she delights in performing old Broadway, film and cabaret music, which can be found on her new CD, 'On My Way to You'. Recorded in New York City by Sean Swinney, with the fabulous Mr. Bill Lewis at the piano, recent reviews of this album state, 'Wilson sings stories beautifully.....' (Judith Reynolds, The Durango Herald); the Denver Post has described her voice as '....priceless, convincing, well-defined.' Not only the beauty of her voice, but interpretation, attention to words, and faultless technique will have you listening to this music over and over again. 'On My Way to You' follows her first CD, the well-received 'Sometimes', a beautiful blend of old and new theatre/popular songs. Wilson lived in New York City for several years, appearing in a variety of professional engagements. In 2002,at the end of a year teaching voice/opera workshop/music appreciation at the University of Wisconsin, Green Bay, Wilson was presented in recital at the Academy of Music and Dance in Bratislava, Slovakia - the first American soprano invited to sing at that institution. She delighted listeners with not only her presentation of classic opera and art song, but with music of American composers, mainly from the world of the musical theatre. She dazzled audiences as Laurey in 'Oklahom' in 2006, as well as Sister Amnesia in the Cortez High Desert Community Theatre (CHDCT) production of 'Nunsense' in early 2006, reprising the role in special 'Back by Popular Demand' performances of the comedy in April. In October 2005, Ms. Wilson was one of the top placing entertainers in the Spotlight to Stardom competition held at the Fort Lewis College Community Concert Hall in Durango. She entranced a highly appreciative and responsive audience with Noel Coward's 'Nina'. Other appearances include singing the role of Maria in 2005 in 'The Sound of Music' with the CHDCT, performing in December 2004 with the Santa Fe Desert Chorale, and cabaret at the La Fonda hotel, Santa Fe. In July 2004 Ms. Wilson debuted with Music in the Mountains at Durango Mountain Resort, in 'Winter Apples', an original piece for two sopranos, piano and oboe, by Katherine Freiberger. During her tenure in New York City, she presented concerts at the American Landmark Festivals Concert Series, the Donnell Library, the American Institute of Guitar, and historic St. Peter's Church in Chelsea, among many others. Listed among her operatic roles are Olympia in 'The Tales of Hoffman' with the Stony Hill Players in Summit, New Jersey, and First Spirit in Mozart's 'The Magic Flute' with the Amato Opera in New York. Some favorite roles in musical theatre are Marian in 'The Music Man', Julie in 'Carousel', and Hodel in 'Fiddler on the Roof'. She has also appeared at the Santa Fe Playhouse, Santa Fe Music on the Plaza, and at Judy's Restaurant and Cabaret in New York City. A gifted oratorio interpreter, Ms. Wilson has been the featured soprano soloist in 'The Messiah' for NYC's Music at Holy Trinity Concert Series, Schubert's Mass in G and Bach's 'Wachet Auf' (Cantata 140) for Music at St. Paul's in Denver, 'Davidde Pentitente' with the Larimer Chorale/Ft. Collins Symphony, and Mozart's 'Vesperae Solennes de Confessore' in Denver. She has sung Mozart's renowned vocal/orchestra concerto 'Exsultate, Jubilate' in the Loveland Chamber Orchestra's A 18th Century Evening, musical theatre with the Colorado Theatre Orchestra in 'A Sondheim Revue', a classic repertoire in the Boulder Bach Young Artist's Evening, and recitals in Iowa, Nebraska, South Dakota, Utah and Wisconsin. In addition to her musical performances, Ruth appears in cable TV commercials, has a busy regional performing schedule, and maintains a private voice studio.

Here's what you say about
Ruth Francisco Wilson - On My Way to You.