Sheera Ben-David - On a Carousel 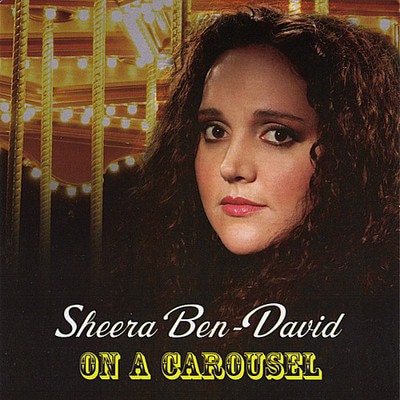 Talkin' Broadway Review- Rob Lester July 22, 2008 'Isn't it rich? ...' Hearing Sheera Ben-David sing the first line of the very familiar 'Send in the Clowns,' three-quarters of the way through her CD, she could be asking a rhetorical question about her striking, velvety voice. Not allergic to drama, her performances set moods quickly, arriving fully formed-cutting to the chase and cutting no corners vocally because she has the range and control. A cloak of melancholy is something she can wrap around herself comfortably, unselfconsciously. However, there's a palpable sense of wanting to reach out and communicate and be understood, rather than shut others out and be lost in self-pitying gloom. When she tosses off that cloak to exult in being 'King of the World,' (Jason Robert Brown, Songs for a New World), it's a joyful and defiant release. Projecting some of an 'old soul''s wisdom and understanding beyond her years on the heavier material, her heartrending renderings command respect as she pours out both the melody and what seems to be lived-in philosophy. In different ways, the reaching-out 'Here's to Life' and the thrust-inward sorrowful lament 'I Miss the Mountains' (Tom Kitt/ Brian Yorkey) are drenched with determined desire to face and embrace life's ups and downs. Perhaps 'catharsis' is the key word here. There are three melodies by Jacques Brel, whose music was the sole focus of her previous album. She revisits one piece here, the tour de force 'Carousel.' Three songs from composer-lyricist John Bucchino, whose unabashedly naked-heart songs suit her well: the pain in 'If I Ever Say I'm Over You,' the wistful 'Unexpressed' and the carpe diem plea to hold tight to 'This Moment.' These three have her with just piano accompaniment, and the simpatico playing is by her talented musical director/arranger/producer: her brother, Adam Ben-David, conductor of Jersey Boys on Broadway. On others, bass and drums are present, with guitar on a couple of cuts as well. (The album was recorded during live performances, but the applause is basically edited out and there's no patter. Sheera's current live gig is performing at the Colony Hotel in Palm Beach, Florida where she is through Saturday.) One goes for quite an emotional ride when spinning On a Carousel-if not for the obvious title reference to the Brel number, it might just as well be called On a Roller Coaster. Sheera's depth of feeling examining the highs and lows of feelings resonate as much as her full-bodied voice. Looking at some of the more familiar, oft-recorded material, there does not seem to be an agenda for re-inventing or trying significantly different approaches with new angles or tempi. It's all approached with great integrity and respect, passionately sung, but without the kind of touches that make one look at a well-known song in a totally new way. Surely there's room for one more version of each of those when sung so skillfully and powerfully, with thoughtful, throbbing theatricality. With Sheera, sheer vocal prowess could almost be enough and, if the rest is just icing on the cake, there's quite a lot of icing and it's the best kind-tasteful, interesting-and rich. 'A strong expressive voice, phrasing that cuts a swath through a song, and a focused interpertive view...evoke(s) a pristine waterfall making rainbows on a sparkling summer morning.' Stephen Holden- New York Times 'Songs nestled into the warm, earthy folds of her voice like lovers on a bearskin rug, interpertive acumen to undergird her big and lush sound...in the final reduction, Ben-David's rich and substantial taste wins the day.' Adam Feldman- Time Out NY '...superb: focused singing with integrity and emotional, involved interpretations that rang true. So much humanity comes through! She's also down to earth, funny, and classy. If she were an ice cream flavor, she'd be the richest one, ice cream for grown-ups, served with warm brandy-definitely nothing syrupy.' Rob Lester- Cabaret Exchange 'Dark and intense as a hurricane heading for the coast...an imposing voice and an equally imposing sense of humor.' David Finkle- The Village Voice 'Warm, passionate and compelling... Without a false step and never losing focus, Ben-David's interpretive musical power attacks each tune with keen expressiveness.' Elizabeth Ahlfors-Cabaret Scenes 'Step right up and see the lady with the huge talent.' -Backstage Magazine.

Here's what you say about
Sheera Ben-David - On a Carousel.