Lello Molinari - On a Boston Night 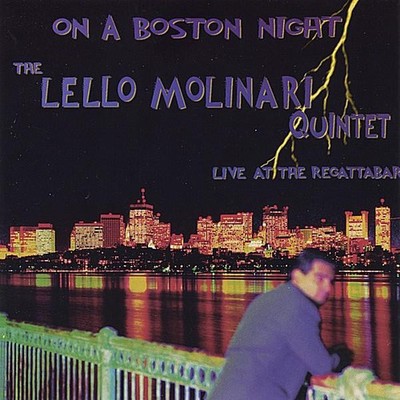 I was born and raised in Naples, Italy in1962. There wasn't much music in my life growing up...I was very involved with soccer... still my father was a Glen Miller fan and my mother had studied classical piano early on. My brother was the first to pick-up an instrument (drums) and form a band. That's when I decided to do the same. I played a little piano, and I had a drummer friend...so we started looking for a bass player. We found a piano player with more experience... and they decided I should play bass. My first bass was a Hofner like Paul's with the early Beatles. We played by ear, the repertoire was Yes, Genesis, and various English Pop. After a going through a few bands and a few bass lessons, the music moved toward Funk, Earth Wind & Fire, The Average White Band, etc.. The bass by then was a Fender Jazz. After more lessons I started to mingle more and more with a jazz crowd . The fender jazz was traded for an Ibanez fretless, and I started playing standards. In 1982 at the age of 20 I moved with my family to Milano. There I decided to go back to school. I bought an upright bass and enrolled in the Scuola Civica di Sesto San Giovanni. I studied classical music for 3 years, and then joined my first professional jazz band. That band was the Italian Vocal Ensemble; 2 vocalist guitar bass and drums. We won third prize (out of a few hundred) in what was called Coppa del Jazz 1995 (a competition much like a soccer tournament). In the qualifying rounds we were performing on national radio and television, as well as in jazz festivals. Such good placement led to more concerts Pompei Jazz, Pescara Jazz, as well as to a recording contract. We then recorded Chiaroscuri for Red Records with Mike Melillo on piano as special guest. While recording the album I applied and received a scholarship from the Berklee College of Music and moved to Boston in 1986.      While at Berklee I founded a couple of bands. One was High Society, a traditional jazz band mainly for working at private functions. The other was a contemporary jazz band for clubs and festivals. In 1988 The International Quartet toured Europe performing in Holland, France, and Italy, and participating in festivals such as Umbria Jazz. After graduating from Berklee I applied and got a scholarship to attend the New England Conservatory.      In 1989 I began my masters degree program at NEC. One of the most significant musical experiences was my first ensemble there. It consisted of myself on bass, a very good drummer, and our teacher George Garzone on sax. Playing with such trio every week really opened-up my mind and ears. Also at the same time I was studying bass with Dave Holland. Over the following 2 years. I was fortunate to learn a lot from both of these masters. In 1990 I was the recipient of the Boston Jazz Society's award for deserving young jazz talent. That year I also briefly joined the Either Orchestra. It followed a brief tour and performances at events such as the Du mounier Jazz Festival in Toronto and the Boston Globe Jazz Festival. In January 1991 George Garzone asked me to join him on an Italian tour. During that tour we recorded Do You Know A Cheap Hotel? Later that year I was fortunate to invite and perform at my senior recital with George Garzone, Bob Gullotti, and Luigi Tessarollo. That was the beginning of the Lello Molinari Band. In September of that year I recorded my first CD No More Mr. Nice Guy, released in 1992 for Accurate Records. That CD received a lot of nice reviews and got some nice work for the band for a couple of years. In 1994 we released On A Boston Night recorded live at the Regattabar Jazz Festival in Cambridge, it featured George Garzone, Bob Gullotti, and Rick Peckham. Since then the band has been performing in New England, New York and Europe. We were invited to perform at events such as Pori Jazz Festival in Finland and Verona Jazz in Italy. For the first 4 editions 1995-96-97 & 98 I was invited to perform at the Valtellina Jazz Festival in Italy performing with Jerry Bergonzi, Victor Lewis, Joe Diorio, and Dominic Eade. Since 1994 I am the principal bassist with the Melrose Symphony Orchestra and recorded 2 CDs. I also occasionally collaborate with the Quincy Symphony Orchestra and the Cape Anne Symphony Orchestra. Since 1997 I have been an assistant professor at Berklee College of Music, where I teach ensembles. In March of 2000 I recorded my third CD Multiple Personalities for Splasc(h) Records. In June 2001, I toured Japan for 18 days with Makoto Takenaka, Bob Reynolds, & Jon Hazilla. September 2001 will be the release date for Multiple Personalities.

Here's what you say about
Lello Molinari - On a Boston Night.