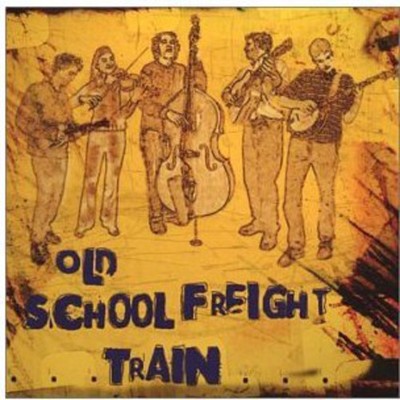 'Pointing to such acts as Old School Freight Train, Melanie Cannon and Alecia Nugent, he [Ricky Skaggs]says, 'There's all kinds of bluegrass out there now, with new faces and images that I think it needs.' 'You can think of the band [OSFT] as central Virginia's answer to Nickel Creek...' - Richmond Times Dispatch 'Every member is capable of lightening-fast, blazing leads, and they pass them around in a call and response not easy to keep up with.' - Richmond Music Journal 'Old School Freight Train plays original tunes with a style that combines many styles, the end result being a sound all their own. They might call themselves Old School, but it sounds brand new to me.' - Victory Music Review Old School Freight Train (OSFT) has been creating new sounds in acoustic music since September 2000. Conceived as an outlet for the diverse musical interests of it's members, OSFT explores bluegrass, jazz, classical, Latin, and funk. After several months working up original material, OSFT hit the local music scene around the start of 2001. By the end of the year they began recording their debut album at Doobie Shea Studios. This self-titled album, released in February 2002, features 11 original compositions. OSFT is beginning to make ripples in the national acoustic music scene. Since early 2002 the band has performed alongside top national acts such as Bruce Hornsby, Del McCoury Band, Earl Scruggs, The Lonesome River Band, the Lynn Morris Band, Ronnie Bowman, Wyatt Rice, Ricky Skaggs and Kentucky Thunder, Gillian Welch and David Rawlings, Leftover Salmon, Larry Keel Experience, and the Disco Biscuits. In addition, OSFT has placed 2nd at two prestigious band contests, the Telluride Bluegrass Festival and the Rocky Mountain Bluegrass Festival (Rockygrass). Banjo player Ben Krakauer followed up a second place finish at the Merlefest banjo contest with a first place victory at the Rockygrass banjo competition. OSFT fiddler Ann Marie Calhoun placed 1st at the Rockygrass fiddle contest, and mandolinist Pete Frostic placed 2nd in the Rockygrass mandolin contest. Old School Freight Train is the new band to watch, as they continue to gain exposure and win new audiences with their original sound and diverse repertoire. On the horizon is a second recording project of original material followed by a full-time, national touring schedule in the summer of 2003.