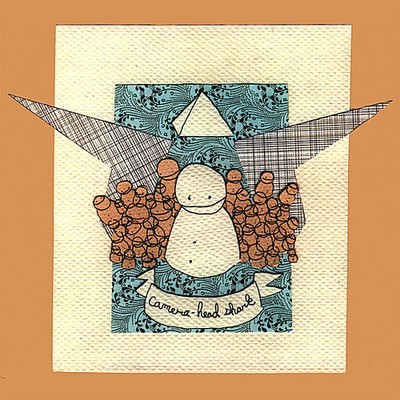 Camera-Head Shark began in January 2007 as an excuse to mess around with instruments and melodies. George Kalivas and Ry Smith wrote enough songs to perform at local bars' open mics and small rock gigs. Once Ryan Foster and Charlie Stucklen joined the band full-time, singing songs in front of people while drinking beer became a local demand. Within a few months, the band had enough support, material, and motivation to record their own debut LP. The recording of 'Oh, You' commenced at the end of April. Engineered and mixed by close friend/musician Udbhav Gupta, the album was tracked entirely in George's basement on Long Island. Most of the instrumentation was done by the band members: George on guitar, Ryan on bass (and on one or two ripping guitar solos), Ry on piano, and Charlie doing the drum thing. A couple of their musician friends joined in to add some of the album's textured tones, such as violin, cello, trumpet, and girly voices. Vocal props are given to George and Ry, with the former singing the lead on everything except 'Fire Drill,' 'Since the Stone Age,' and the majority of 'Pack Up Your Suitcase.' Everyone in Camera-Head Shark has sung backup harmonies, both live and on their recordings. Tracking for the album was finished by the beginning of June 2007. That summer, the band played live shows throughout Suffolk County, Long Island and New York City. They constantly wrote new songs and finished the mixes of 'Oh, You.' In August, the record was mastered by Ken Wallace of Ian London Productions in New York. On Halloween, they released their debut album and threw a CD release/costume party at their favorite local bar. After ten months of writing music and performing it for friends, Camera-Head Shark had an eleven-song self-produced album. The band feels that this is their greatest accomplishment yet as a diploma-deprived musical outfit. The songs on 'Oh, You' were written by George and Ry Smith, almost completely as a joint effort. They all try to focus on melody and rhythm as a musical matrimony. The blended result is a pop smoothie with a couple of key changes and strange rhythmic patterns. The songs' content, in the opinion of the writers, is generally ambiguous; but, as with most rock recordings, the themes of love, nostalgia, and zombie survival are inherently prevalent. They've got to be. Armed with 1,000 album copies, the resources of the internet, and the high fives of friends and listeners of all ages, Camera-Head Shark just wants to create, release and perform music to whomever is interested.

Here's what you say about
Camera-Head Shark - Oh You.