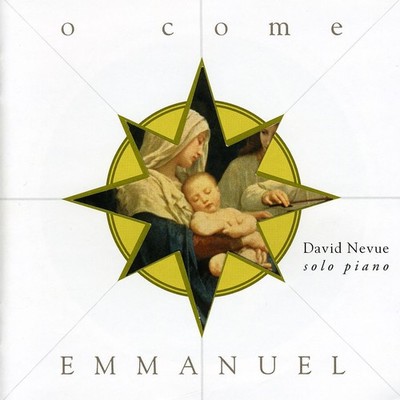 CD Review... 'Being a piano teacher who starts students on Christmas music in early-November in preparation for the winter recital, I'm not always very receptive to reviewing Christmas albums much past Thanksgiving, but David Nevue's 'O Come Emmanuel is truly exceptional. Nevue set out to create a Christmas album that was something different, and succeeded well. 'O Come Emmanuel' is one of my favorite Christmas albums now. - 'Kathy Parsons, Solo Piano Publications Comments from Fans... 'I meant to tell you how much I liked your wonderful new Christmas album! It's just superb--and everyone who's heard it thinks so too....My ex's wife doesn't like anything remotely 'religious' (and anything that has to do with hymns turns her off!), but she loved your Christmas CD!...It really is 'any time' music, David. You succeeded in making an album that's very special Christmas music, but that also can be listened to at any time of the year.' - Lynn Liontos 'I love your CD (O Come Emmanuel). I mean love. We've listened to it all month and I am so impressed with the sincerity and sensitivity that is imbued in it, especially when considered against 99% of commercial Christmas music. I tend to get a little blue (a la Charlie Brown) from all the stress of the season and your CD is the perfect remedy for it. You've created a gift for the rest of us, and I thank you for it.' - Mary Kelly About the Artist... With a piano style somewhere between Chopin and George Winston, David Nevue brings melody and heart back to instrumental music. Perhaps Heartsong Review said it best when they described his music as 'hauntingly romantic.' David's music introduces us to a wilderness of musical ideas which the listener becomes anxious to explore. Interestingly enough, if you ask David about his musical background he might surprise you. He comes not from a background of polished piano music, but grew up a typical 1980's teenager strongly under the influences of such progressive rock artists as Rush, Pink Floyd, and Kansas. David pursued rock music as a career throughout his college years, playing keyboards for a number of garage bands. It wasn't until David's college roommate introduced him to the piano music of George Winston that he began to consider a career as a pianist. 'Prior to hearing George Winston, my idea of 'solo piano' went no further than classical music, a form a music I've never felt much connection with. Winston's impressionistic style was at that time unlike any music I had ever heard. My roommate played Winston's music all the time, and it just sort of seeped in. As a result, I found myself playing around with a few melodies at the piano and I just never stopped.' In 1992 David released his first album, 'The Tower.' 'At the time I recorded The Tower I was listening to a lot of the band Renaissance. I was really going for that very poetic, artsy, dramatic piano sound.' David promoted 'The Tower' via mail order and at performances. Building on the support of his small but growing fan base, David put the profits from 'The Tower' back into his music. His efforts eventually resulted his next project, 'While the Trees Sleep' released in 1995. Since that time, Nevue has released several more CDs, including 'The Last Waking Moment,' 'The Vigil', 'Postcards from Germany' and a 'best of' collection called 'Whisperings.' Today, David markets his music almost exclusively via the Internet. He is the author of the book 'How to Promote Your Music Successfully on the Internet,' and founder of the Music Biz Academy, an online resource for independent musicians selling music on the web.

Here's what you say about
David Nevue - O Come Emmanuel.