Kat Parsons - No Will Power 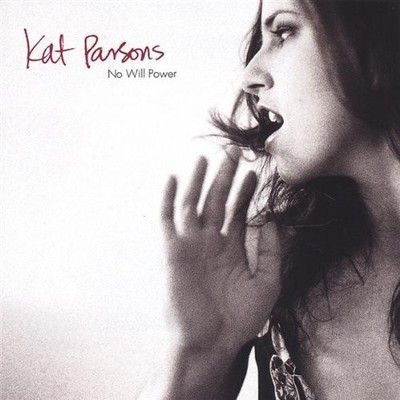 The story behind Kat Parsons' new album, No Will Power, is nearly as interesting as the album itself. Kat let her loyal fanbase know that she was ready to record her first album of new material since the national release of Framing Caroline on Chicago indie label, Waterdog Music. Soon thereafter, she received hundreds of emails from fans pledging financial support and offering to pre-purchase the unrecorded disc in hopes of making the project a reality. This unusual financial partnership between artist and fan raised enough money for Kat to record No Will Power, which is scheduled for a March 2005 U.S. release. In addition to Kat's own vocals, piano and guitar, No Will Power features performances by Michael Chaves (John Mayer, Sarah McLachlan, Rufus Wainwright), Joe Ayoub (Liz Phair), Chris Opperman (Steve Vai), screen-actor Dermot Mulroney (My Best Friend's Wedding, Low and Sweet Orchestra), and production by Paul Maylone (Junkie XL) and Geza X (Meredith Brooks, Tyler Hilton). Kat spends much of her time touring and has shared the bill with and opened shows for artists including Jim White, The Fixx, Dave Mason, Maria Muldaur, Spin Doctors, The Knack, Jonatha Brooke, Shannon McNally, Lori McKenna, Tristan Prettyman and Charlotte Martin. Kat's songs have also been featured on singer-songwriter compilations in the UK, US, and France. Kat's been dubbed a 'modern day Carole King' and has received praise from publications including The Washington Post ('her songs possess a fiery spirit') The Onion, Chicago Tribune's Metromix, featured on One Way Magazine's compilation, Music Connection and Songwriter's Monthly as well as airplay from stations including XM's Unsigned Channel (where Kat's competed against herself for the Top 3 'Most Played' slots), WRNR, WBEZ the BBC and WLUW. Furthermore, Kat and her music have appeared on MTV, Wild Chicago, Fox TV, Food Network, and KTLA-TV Los Angeles. A recent review of Kat's live show stated, 'Kat Parsons played her acoustic heart out on a gigantic stage only to dominate every inch of it.' Kat is currently featured on a commercial spot for Baldwin Pianos & Gibson Musical Instruments, and she is endorsed by Yamaha and Audix, who have named her an 'Influential Emerging Artist.' HISTORY: Kat was born to parents Darrell and Julie Parsons in one of Europe's most prominent musical cities, Vienna. Her father was an opera singer in the Vienna Opera House. He recorded with the Clemencic Consort for Harmonia Mundi and is the featured tenor on a Philips release of Mozart's 'Mass.' He still performs occasionally in the Baltimore area. Her mother is a professional keyboardist and singer and released a solo album in Europe in the mid-70s to her credit. She also recorded and released a dance single with her band Foxx Fire. Raised in Maryland as a child and teenager, Kat sang in local shows with her parents and brother Jon, as well as performing in various musical theater productions. Kat became a theater major at Northwestern University (Evanston, Illinois), where her parents first met. Her interest in music continued when she tried to insert herself in already - formed bands and finally realized that she was going to have to start her own band. For a particular show, she became a songwriter out of necessity. Once she tapped into her muse, she continued to write and perform as a solo artist and ultimately with her own band.

Here's what you say about
Kat Parsons - No Will Power.