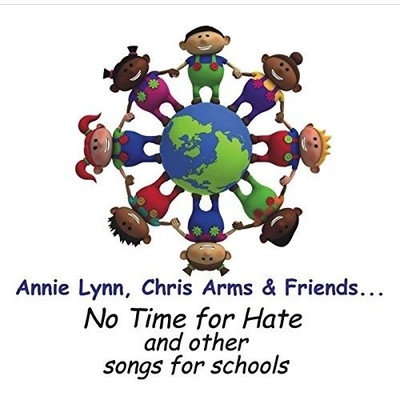 This CD was born out of a growing need for additional good, quality, curriculum-based vocal choral music in schools, choirs, youth groups, and in your home and car. We incorporated ideas from teachers as well community leaders as we crafted this Album, addressing topic matter relevant to a new generation. Annie Lynn and Chris Arms hold six international songwriting competition awards, and each are accomplished musicians. Both contributed to the Album playing guitar, keyboards, and vocals. Chris Arms is also a sound recording engineer and producer, with many albums to his credit, as well as several songwriting hits for artists on the Billboard Top 10. The addition of professional musicians Jay Ansill on Mandolin and Fiddle, Wannamaker Lewis on Banjo and David Arms on Bass (on Who I Am) round out the fullness and cohesiveness of these songs, especially when featured on the instrumental (karaoke) versions. Annie Lynn and Chris Arms recorded 'No Time for Hate and other Songs for Schools' as their way of helping school districts, choirs, and non-profits who have had their Arts Education and curriculum budgets cut or eliminated. As a former elementary school music teacher, Annie remembers the staggering mechanical rights fees paid out just to do a popular song from the radio or from a musical. Hopefully, this CD will help with that problem. This Album was produced specifically to enable choir directors, teachers and youth group leaders to imagine what their own groups could sound like in an assembly or in concert. Songs contain at least two harmony lines, and many were written for three or four vocal parts (Soprano, Alto, Tenor, & bass). 'In producing this Album,' says Annie Lynn, 'we wanted to offer educators a variety of songs for different age groups and vocal abilities.' We hope you will receive and listen to this Album with the kind of open minds and hearts that went into making it. In addition, we hope that the messages in the song will inspire young and old minds alike. Thanks for listening. Peace, Annie Lynn and Chris Arms (P.S. - If you have an idea for a song for schools, please contact Annie Lynn at [email protected] If we use your idea, we will give you/your school the song for free once we make it!)

Here's what you say about
Chris Arms Annie Lynn & Friends - No Time for Hate (Songs 4 Schools).