Rashied Ali Quintet - No One in Particular 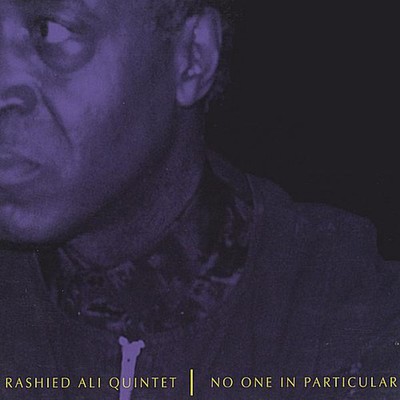 Rashied Ali is a progenitor and leading exponent of multidirectional rhythms/polytonal percussion. A student of Philly Joe Jones and an admirer of Art Blakey, Ali developed the style known as 'free jazz' drumming, which liberates the percussionist from the role of human metronome. The drummer interfaces both rhythmically and melodically with the music, utilizing meter and sound in a unique fashion. This allows the percussionist to participate in the music in a harmonic sense, coloring both the rhythm and tonality with his personal perception. By adding his voice to the ensemble, the percussionist becomes an equal in the melodics of collective musical creation rather than a 'pot banger' who keeps the others all playing at the same speed. Considered radical in the 1960s and scorned by the mediocre, multidirectional rhythms, polytonal drumming is now the landmark of the jazz percussionist. A Philadelphia native, Rashied Ali began his percussion career in the U.S. Army and started gigging with rhythm and blues and rock groups when he returned from the service. Cutting his musical teeth with local Philly R&B groups, such as Dick Hart & the Heartaches, Big Maybelle and Lin Holt, Rashied gradually moved on to play in the local jazz scene with such notables as Lee Morgan, Don Patterson and Jimmy Smith. Early in the 1960s the Big Apple beckoned, and soon Rashied Ali was a fixture of the avant-garde jazz scene, backing up the excursions of such musical free spirits as Don Cherry, Pharoah Sanders, Paul Bley, Archie Shepp, Bill Dixon and Albert Ayler. It was during this period that Rashied Ali made his first major recording (On This Night with Archie Shepp, on the Impulse label) and began to sit in with John Coltrane's group at the Half Note and other clubs around Manhattan. In November 1965 John Coltrane decided to use a two-drummer format for a gig at the Village Gate; the percussionist Trane chose to complement the already legendary Elvin Jones was Rashied Ali. Thus began a musical odyssey whose reverberations are still felt in the music today--Trane probing the outer harmonic limits and changing the melodic language of jazz while Rashied Ali turned the drum kit into a multirhythmic, polytonal propellant, helping fuel Coltrane's flights of free jazz fancy. The rolling, emotion-piercing music generated by the Coltrane/Ali association is still being discussed, analyzed, reviewed and enjoyed in awe as the new compact disk format introduces the era to a new host of the sonically aware. After Coltrane's passing in 1967, Rashied Ali headed for Europe, where he gigged in Copenhagen, Germany and Sweden before settling in for a study period with Philly Joe Jones in England. Upon his return from the continent, Rashied Ali resumed his place at the forefront of New York's music scene, working and recording with the likes of Jackie McLean, Alice Coltrane, Archie Shepp, Gary Bartz, Dewey Redman and others too numerous to mention here. In response to the decaying New York jazz scene in the early 1970s, Rashied Ali opened the loft-jazz club Ali's Alley in 1973 and also established a companion enterprise, Survival Records. Ali's Alley began as a musical outlet for New York avant-garde but soon became a melting pot of jazz styles. Although the Alley closed in 1979, it's legacy continues in the New York jazz scene and Rashied Ali has been busy gigging with a virtual Who's Who in jazz, refining his music and encouraging a host of younger musicians.

Here's what you say about
Rashied Ali Quintet - No One in Particular.