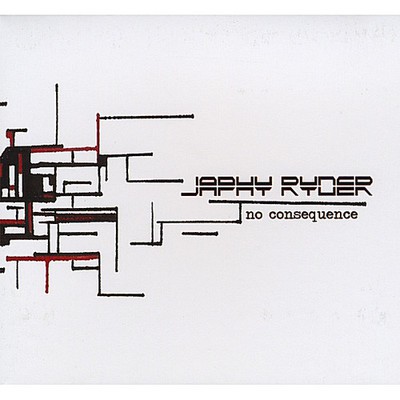 Japhy Ryder's No Consequence is an exercise in versatility, deftly blending intricate multicultural rhythms, powerhouse rock, soaring melodies, and soul-stirring ballads. The band's latest studio effort is a tour-de-force, perfect for both quiet reflection and stereo cranking Saturday night revelry. No Consequence flows in evenhanded variation between hip-busting grooves and spine-creeping dub. The quartet, which describes it's music as an instrumental rock hybrid, cites influences as diverse as Bill Frisell, Fela Anikulapo Kuti, and Radiohead, blending the members' widespread musical tastes into a breakthrough album that is truly inspiring in both musicality and originality. No Consequence is a well layered embodiment of the band's live persona. The rhythm section is fused so tightly that drummer Jay Thime's kick drum and bassist Pat Ormiston's fingertips seem medically inseparable. The duo work off each other to drop impressive breaks and reconnect on a dime. A conscious connection between bass and drum powers the building grooves of the album. This steady constitution allows for the dialogue between the mellow jazz motifs of Will Andrews' trumpet and the powerful riffs and arpeggios of Jeremy Kizina on guitar. Kizina's riffs and licks cut effortlessly through, creating syncopated patterns with astounding precision. Andrews' trumpet provides both fierce intensity and mellow, reverb soaked, delayed brass. Their lines take flight, layering Japhy Ryder's compositions with unconventional melodic interplay. Each musician's style conforms naturally to the others, allowing for communication and fluidity that infuse the band's inventive style into every track. For their sophomore release, Japhy Ryder brought on board long time friends and collaborators Jon Goneau and Joshua Pfeil on keys and percussion, respectively. On the Fender Rhodes and melodica, Goneau's subtlety and skill are highlighted throughout the album. Meanwhile, Joshua Pfeil provides additional percussion, supporting the complex yet driving beats that Thime navigates. With one full length album already under their belt, Japhy Ryder was primed for another endeavor when they headed out to record at a lakeside cabin in rural New York in October 2007. On a tight budget, the band finagled the empty cottage from a family friend. Although far from plush, a fire in the hearth kept the band warm for the weekend. The quartet then enlisted an old friend for production and engineering-Berklee College of Music graduate Matt Dyson, whose professionalism, skill, and recording wizardry easily took the band's efforts far beyond anything they had recorded up to that point. It is no small task to capture the presence of a live band in the studio, but Dyson soon proved himself capable of not only capturing, but strengthening Japhy Ryder's sound-successfully achieving atmospheric tone for their rock, dub, afrobeat, and down-tempo tracks. The mixing and the dynamics of this album were powerful features which allowed the band to stretch out to new areas. With Dyson's engineering skills and an empty cottage on the lake at Taborton Mountain at their disposal, the band was able to enjoy the luxuries of the studio in a loose and familiar atmosphere. At ease with their surroundings, their material, and each other, the recording became a fluid process unlike anything the group had ever experienced. "We did most of the recording on the first day," Kizina explains. "Actually, about six or seven of the tracks were done on the first take." All told, it took only three days of recording to create what the band considers their best album to date. Throughout the album, jazz themes float among tight, intense grooves, only to suddenly switch gears when it's least expected-whether it be to new planes of atmospheric space or onslaughts of driving instrumental rock. The album shifts with ease between mellow introspective tracks and fist-pumping dance-floor killers. The following is a brief overview of some standout tracks: 1. Boo- A fitting start to a powerful album, the opening horn line heralds Japhy Ryder's arrival, before giving way to a headbanging hard rock riff interspersed with heavy dub. 2. Leah- On the album's second track, the band experiments with alternative time signatures, atmospheric swells, crisp drops, and pulsating riffs. 4. Abami- The most heavily afro-beat influenced cut on the album, Abami, is named in honor of the originator of afro-beat, Fela Anikulapo Kuti. 7. No Consequence- The album's title track features tight changes and showcases the band's songwriting abilities with quick drops and unison runs. 9. Johnny Don't- A storm of whirling energies, this song is a multi-section composition which remains true to the band's signature dynamics, with a raging, anthemic refrain and beats that straddle the line between hard-rock and electronica. 10. North Winooski 2 Step- The genre-defying introduction gives way to spacious ambience, followed by the exceptional soloing of Kizina and Andrews which drive the song to it's dynamic conclusion. 11. Gina's Kitchen- The album closer captures the spontaneity and skill of the group, with a heartbreaking melody that soars over tasteful, subtle interaction. Preparing for the release of No Consequence, Japhy Ryder remains busy touring and writing new material. Throughout 2007, the band played well over 100 shows. They have performed at such prestigious venues as Burlington, Vermont's Higher Ground, New York City's Knitting Factory, Boston's Paradise Lounge, Cleveland's Beachland Ballroom, and Philadelphia's Grape Street, not to mention festivals such as Camp Bisco, Northeast Kingdom Music Festival, and Gratefulfest. They have shared bills with international touring acts like Femi Kuti, The Roots, Ozomatli, and Bernie Worrell. No Consequence is Japhy Ryder's strongest release to date-a successful studio effort where powerful breaks and soothing melodies merge at every corner. Each of the eleven tracks takes on a unique hue, and as the listener moves from track to track the music paints a portrait of an ever-evolving sonic landscape. The final product is a powerful experience that will undoubtedly fan the flames of Japhy Ryder's ever increasing fan base.

Here's what you say about
Japhy Ryder - No Consequence.