The God Awfuls - Next Stop Armageddon 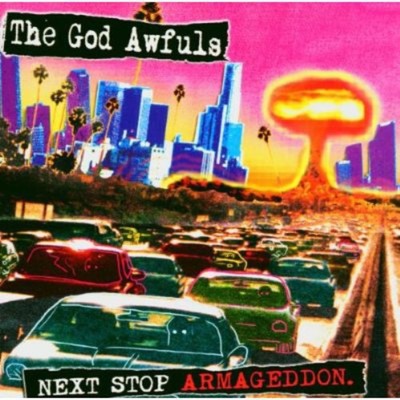 The God Awfuls emerged out of a rather desolate and/or uncultured section of Los Angeles, where a large part of growing up means having to impress your peers who have yet to leave an impression themselves. Not much out there to expose yourself to unless your idea of culture is getting loaded, getting laid, and getting lost in a sea of redundancy. The cycle is about to be broken. Floating around between high school bands, singer/guitarist Kevin De Franco and bassist Kyle Lumsden eventually crossed paths and formed the base of The God Awfuls, with guitarist Chris La Fave and drummer John Skelly eventually completing the package. Writing songs overflowing with message and meaning and playing shows anytime and anyplace propelled them into more than being just a local band with stage time. Citing influences such as The Clash, Cockney Rejects and Rancid, The God Awfuls create the perfect blend of punk rock. Mixing old-school 70's-era UK punk with west coast 80's hardcore punk and even early-90's alternate-punk, The God Awfuls boast a unique brand that will appeal to all sub-genres of punk, from the studs-'n'-hawks crowd to the bro-hymn-skater crowd. The songs are not only catchy, but the lyrics have such passion in them that you can't help but at least notice what's being said. Add the fact that punk rock has become littered with bands that come off as whiners and criers, and The God Awfuls serve as the antidote: a much-needed session of tough love, followed up with a well-deserved kick in the ass. Their debut album Next Stop, Armageddon shows their raw, unfiltered passion used to teach the kids about this thing called punk rock. Produced by The Greedy Bros. (a.k.a. Blag Dahlia, the infamous singer of The Dwarves, and engineering partner-in-crime Brad Cook), Next Stop, Armageddon will stand out amongst the punk crowd as an album that has meaning and purpose while not stooping to lowest common denominator known as appealing to the generic masses. Quality counts at Kung Fu Records, and The God Awfuls are no exception to that rule. Bands like Social Distortion, Buzzcocks, The Vandals, Swingin' Utters and many more have granted them stage time for good reason. The God Awfuls bring a serious message to the stage while not cheating themselves on their integrity. Stand up, purge your predispositions, and let The God Awfuls reassure you that there are bands out there that still care about our society, still question authority, and still play true punk rock.

Here's what you say about
The God Awfuls - Next Stop Armageddon.