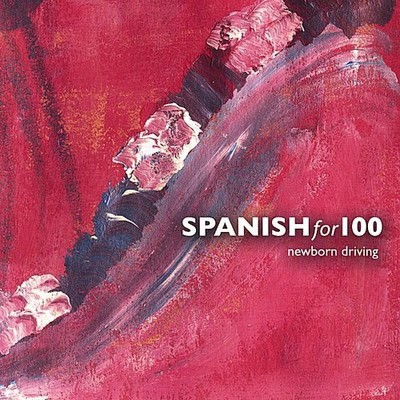 From the drums up, Spanish for 100 is looking at the seams of the song. Based in Seattle, the band is comprised of Aaron Starkey, Bob Rees, Ross McGilvray, and Corey Passons, working in the two-guitar, bass, and drum format. The heart of the group is collaboration based off the whispers of heart-born, acoustic songs. The result? Granite, alkaline rock songs that take you down Highway 1. Newborn Driving was produced and engineered by Phil Ek (Built to Spill, Modest Mouse, Pretty Girls Make Graves.) Tracked at the infamous Jupiter Studios during the winter of 2003, Spanish for 100 has produced a debut work that sings with enthusiasm and moves with the passion of your favorite Pixies tape. Throughout this recording, Corey Passons' vocals evoke a Neil Young-like truthfulness with energy that cuts a swath of sincerity through a wall of guitars not heard since the heyday of Walt Mink. Embodying the tradition of indie songwriting but sidestepping it's conventions, Newborn Driving pays homage to the art of strong pop melodies, English amps, and thinline telecasters. Jeffery Rush of Tablet newspaper says: 'Spanish for 100 is a full sounding indie-style group with a vocalist that sings as though his heart is buried in the deep south. The result sounds like a collaboration between Clodhopper and Modest Mouse. Hopefully, neither of those comparisons leave you wanting to do anything other than listen to these guys, because they're really good. If you make it out to discover one new band this month, make Spanish for 100 your musicians of choice'

Here's what you say about
Spanish for 100 - Newborn Driving.