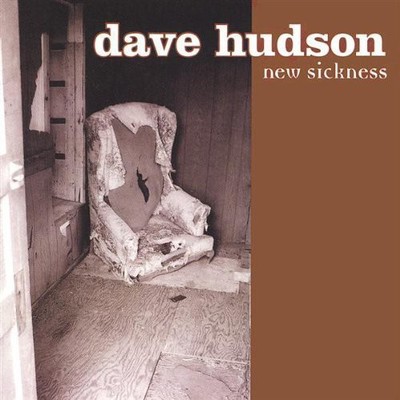 *************** 'There is no question that in the void of actual music last year, Dave Hudson came out on top. I say, 'Forget Radiohead, Dave Hudson's New Sickness is the best album of 2000'. Django Bohren, The Excuse.com *************** With lyrics soaked in despair, religion and alcohol Dave Hudson's second album, New Sickness takes us on a journey. He mixes distorted sounds and gritty tones to make very compelling music. Heidi Kontasky, SF Weekly *************** There's something about Dave Hudson songs that makes you want to use words like 'redemption' and 'blessing'. Perhaps it is that the worlds he creates are filled with a slow-burning desire for something more, with patient existentialism and with lives of quiet desperation. Michael Houghton, Section M *************** Dave Hudson's lyrics are Beat influenced oral poetry with lots of Bukowski-esque references to race tracks, dogs and addiction that sound like they may have been scrawled on the 'back of unpaid bills'. Owen Otto, Section M *************** What exists for Dave Hudson is a heartfelt desire to make the music he loves. The very core of that music is a cuckoo's-nest blues, a feverish cocktail of styles that will ring sincere for as long as people love the ones they hate, and hate themselves for doing it. Stefanie Kalem, Tampa Weekly Planet *************** Both of Dave Hudson's CD's, Reverence and New Sickness are excellent new music that is influenced by Tom Waits (and others) but is not derivative. Reverence (his first) is the more Waitsian of the two, while New Sickness (his latest) sounds a little like a cross between 'Mutations'-era Beck and Nick Cave, along with the Waits influence. Brendan Costello, editor/Lurch Magazine *************** As we enter the new millennium it is important for America to...listen to voices that remind us who we are. Dave Hudson is one of those voices; listen to him and listen to yourself. Andrew Loog Oldham (original manager/producer of the Rolling Stones) *************** Dave Hudson is a singer/songwriter with a unique voice and something to say. His music pays homage to the songs of Tom Waits, Nick Cave, Leonard Cohen and Neil Young. Dave blends these influences into something that is completely his own. He calls it Gothic Folk-Noir. Dave Hudson first came to the attention of the music world in 1991, when a chance meeting in New York led to an audition with legendary Rolling Stones manager/producer Andrew Oldham. Oldham was so impressed with Dave's talent and potential, he immediately put in motion the machinery to 'make Dave Hudson a big star'. Dave didn't agree with Oldham's 'formula for success'. In fact, the whole major record label scene was something he wanted no part of. Determined to do it his way, Dave returned to California and started writing new songs. He then contacted an old friend, guitarist/producer Tommy Steinberg in New York and plans were made to start their own label to promote Dave's music. And so, Rhyolite Records was formed in 1996. Their first release, entitled Reverence, received favorable reviews and a cross-country tour was launched in the fall of 1998, with Dave performing solo acoustic gigs at colleges, coffee houses and small clubs. Then it was back to writing more songs and recording a new CD. New Sickness, his latest, released in December 2000, reflects Dave's experiences on the road during that tour of 1998. Based in San Francisco, Dave is now performing his songs backed by a band that includes long-time collaborator Tommy Steinberg on guitar, Jason Schwartz on bass, Noah Kuchins on keyboards, and Rich Douthit on drums. Dave Hudson is available for weddings, bar mitzvahs and Sweet Sixteen parties. ***************.

Here's what you say about
Dave Hudson - New Sickness.