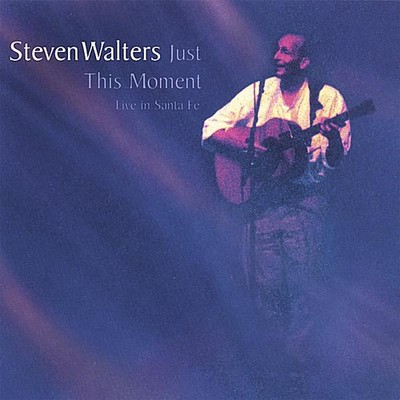 A bit about Steven Walters. With a playful simplicity, and a fresh approach to contemporary folk music, Steven Walters invokes the most tender feeling level of the heart, moving you deeply --- to joy and laughter one moment, unabashed tears the next. With deftly woven lyrics and masterful guitar work, his songs are offerings of humor, spirit and sweetness -- serious music for the lighthearted soul. Since age seven, Steven has made a life's work of writing and performing original music. For twenty years he enjoyed a career on the road as a professional guitarist and vocalist in blues and country music bands. In 1993, after being diagnosed with leukemia and told he had 24 hours to live, Steven began a period of intensive meditation. Miraculously, he became strong enough to receive a bone marrow transplant and make a full recovery. Inspired by this second chance, in 1995 Steven began to truly live his dream, giving up the smoky bars and club circuit to perform his original music. Steven performs and speaks at diverse venues including concert halls, festivals, conferences, new thought churches, folk clubs and intimate house concerts worldwide. Events at which he has been invited to share his gifts include: concerts and workshops at the Esalen Institute; The Rainbow Festival, (Germany), The No mind Festival, (Sweden) The Alternative Festival, (Norway) benefit concerts for the Gangaji Foundation (also featured in Gangaji's video, River of Freedom), Ram Dass, and others; the Inside Edge; and The International New Thought Alliance Conference. He has two independent releases available on compact disc.

Here's what you say about
American Standard - Just This Moment.