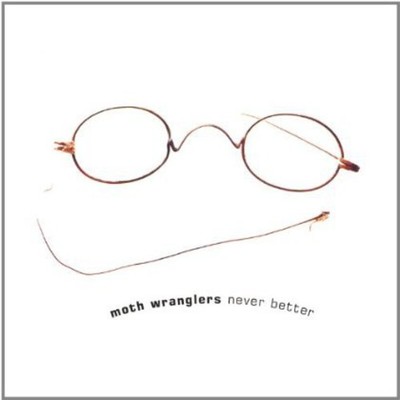 Moth Wranglers is the anti-band collaboration between ld beghtol (flare, three terrors, guest vocalist on the magnetic fields' 69 love songs) and chris xefos (drop quarters, ex-king missile). Their mission: to collect and present ideas that break everything and everyone (including the creators) down to their component parts - for no reason other than it must be done. Since 1998, technology has allowed beghtol (NYC) and xefos (sf) to work together closely (from opposing coasts) to create music that focuses on the pair as a team - not just ring leaders of their musical circus. Using their physical distance as a tool, they are allowed to grow musically in completely different ways - whatever common ground remains is expressed in their collective work. Mw's latest release, never better (december 2004) reveals the partners' modus operandi: hi-jack best-of-breed performers from various groups and other less organized situations in order to fulfill their musical vision. Yet, while never better features an eclectic array of instruments and genres, the songs flow seamlesly into one another, creating not merely a collection of songs, but rather a total aural experience. Among this 7 song, 33 minute and 6 second 'mini album' you'll find pretty pop songs ('never said i'm sorry'), epic piano ballads ('course') and general musical mayhem ('better off alone'), as well as a 7½-minute cover of the pixies' 'no. 13 baby' - appropriately dubbed the 'all night long mix.' Those who have succumbed to bribery, blackmail and debauchery in trade for their performance contributions are christopher ewen (future bible heroes), doug hilsinger (waycross), dudley klute (three terrors), and jeff potts (dirty power). never mind the context (released october 2001) was the first full-length CD from the mw collective. This CD contains a baker's dozen songs in as many genres, as one might expect from mw. Ranging from psychotic hoedowns and bright 'n' bouncy sing-alongs to psychedelic rockers, gospel-tinged laments, all armed with a skewed pop sensibility and a slew of weird instruments and toys. Mw on nmtc make a noise one critic calls, 'a disconcerting, beautiful dichotomy of sound, dark humor and light-hearted horror.' guest stars included members of camper van beethoven, the magnetic fields, the klezmatics, the posies and thousands more. Moth Wranglers' debut single (released november 1999) stars a skewed country-swing tune, 'turnabout (for dennis),' as it's a-side. This piece pits beghtol's best baroque hoe-down yodel against xefos' jangly acoustic guitar and last-gasp accordion, and is rounded out by extraterrestrial jordanaires-styled backing vocals and handclaps. Guests wranglers on this track include victor krummenacher and jonathan segel (camper van beethoven) on upright bass and fiddle, respectively. For the b-side, 'new mission terrace #47,' xefos intones a text collaged to a wayward friend over an ambient bed of pulsing, oceanic keyboards (courtesy of alison faith levy (the loud family)), backwards strings and throbbing blues harp. Over the interim years and with no discernable frequency, Moth Wranglers (as a duo) has performed live - with the aid of backing tracks, single-malt scotch, floral tributes, a vintage mac powerbook 150, silent prayers and a small pink leather pig named eleanor - to slightly bewildered and mildly enthusiastic audiences, all proving that yes, you can't take it with you.

Here's what you say about
Moth Wranglers - Never Better.