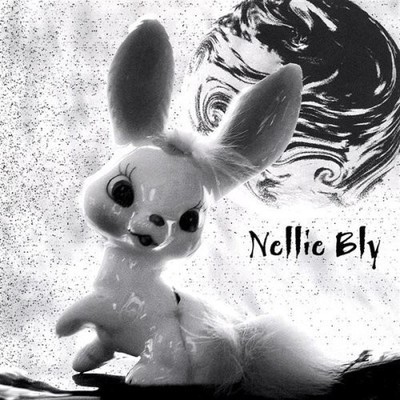 Who the Hell is Nellie Bly? Still in it's infancy, this project is drawing considerable head-scratching from those who've heard vague word that Nellie Bly is some kind of Big Deal. Many people in southern California and the country are anticipating this latest project from golden-throated chanteuse/songwriter/Detroit transplant Missy Gibson (aka Ms. Bly) and maniac songsmith/multi-instrumentalist Mike Flanagan (Mr. Nellie), amidst the tumult of The Lisa Marr Experiment, Breech (also available at CD baby), Giant Ant farm, and all their other current and former projects. We mentioned that sense of anticipation, didn't we? Flanagan and Gibson have finally finished laboring away in the Studio in Long Beach, California, shaping myriad new musical ideas into proper Nellie Bly creations. The songs on their debut self-titled CD are evidence of their early efforts, bulging with a kind of unvarnished brilliance that in the past has garnered rave reviews in the Los Angeles Times, the Detroit Metro Times, LA Weekly and many other respectable publications. While their other projects have more of a full-band feel to them, Nellie Bly is more stripped-down, and dabbles with skewed song construction and instrumentation, blending raw leaps of Left-Fieldism into a challenging yet highly listenable pop-rock-folk-trance stew. These two tell us that Patti Smith, Tom Waits and Jeff Tweedy went into a club where the ghost of Liberace was tending bar, but they've yet to finish the joke. The joke, of course, is on us. From RENO NEWS REVIEW: Nellie Bly isn't afraid to embrace the raw and gritty side of rock and roll. The band's self-titled album takes listeners on a tour of the kitchen cupboard (instruments include handy items such as a peanut jar and a knife sharpener) and let's us hitch a ride through blues, bluegrass and country. 'That Was Then,' which sounds like it might have been produced by Nick Cave, has the thin, echoic sound of a dive bar recording. Lead vocalist Missy Gibson can wail like Hank Williams and rage like P.J. Harvey on a punk day, or turn choir girl-sweet or soft and velvety as Cowboy Junkies' Margo Timmins. 'I don't have no pretty-girl hands/I don't dress quite right ... Maybe I'm not graceful/but I stood up when I fell,' she purrs on 'Pretty Girl.' The shiver-giving 'Bucket of Blood' is one of the better songs I've heard this year--one of those wonderful tunes that sound at once warmly familiar and refreshingly new. An album for those weary of shiny, processed rock. -Carli Cutchin from Clamazon.com: Nice little piles of poplet tunes here, thoroughly hummable and nicely played. The recording might remind you of some of the more minimal Latin Playboys recordings, or Los Lobos with Missy Gibson (Ms. Bly) and her golden throat floating along the top, pushing at times. Good mix of instruments for a pop recording, including sax, accordion, trombone, pump organ, and many others, it's has a texture you don't hear every day, and it's easy on the ears. Includes guests like Frank Pahl, Brian Kenney-Fresno, and members of Giant Ant Farm. From OC WEEKLY: ...Their music is truly dangerous-and not in the contrived way that local news shows blather on about rising crime statistics, either. As Nellie Bly (named after the intrepid turn-of-the-past-century female reporter), this duo's recently released self-titled album is full of songs perfect for the moment when a bittersweet breakup curdles into something nasty. How nasty? With tunes like 'Bucket of Blood' and 'Bloodletting,' it's avenging-angel music for the jilted lover or the wronged artiste. 'I'm a malcontent,' says Gibson. 'It's a struggle. I know life is good, and there are many wonderful things, but I have so many bustling emotions. I'm waiting to purge at any moment.' And like any binge and purge cycle, Nellie Bly's is based on painful and soothing extremes. It's Gibson's sexy, husky alto playing in front of a backdrop of studio wizardry; it's snappy songwriting craft doused with a Tom Waits weirdness; and it's a bohemian sound homegrown in the kitchen of Flanagan's Long Beach house (he stomped on a coffee table for the right beat for one song and used a peanut jar and a knife sharpener to cut the rhythms for another). Guitar and bass might be the foundations of Nellie Bly's songs, but they fill out the sound with violins, accordions and even more unique instruments: an antique church pump organ, a cello tuned like a bass, a piano whose strings are weighted down to make never-before-heard notes... -Andrew Asche.

Here's what you say about
Nellie Bly - Nellie Bly.