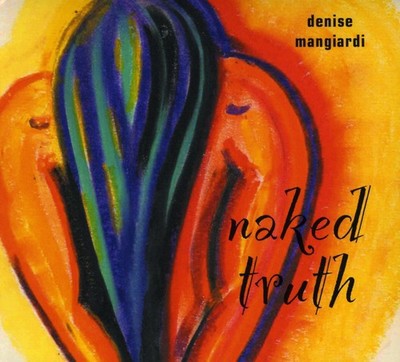 Naked Truth Musicians Denise Mangiardi-Vocals Michael Pellera-Piano Bill Huntington-Bass Johnny Vidacovich-Drums Jerry Bergonzi-Tenor Bill Schultz-cello Peter Martin-Piano This is a compilation of original tunes by composer and singer/pianist Denise Mangiardi. Denise has been compared to Ricky Lee Jones, Shirley Horn and Astrid Gilberto. She has nearly a folk like quality as a lyricist and her harmonies are deep and unique in their nature and sultry in their deliverance. Each song tells a story. Her warm voice is crystal clear and soft. This album is a culmination of work with New Orleans finest, and it features though out the tenor saxophonist Jerry Bergonzi. The album features 8 vocals and two instrumentals. It also features pianist Peter Martin on her beautifully unusual rendition of Livingston, Evan's 'Never Let Me Go.' Finally this was co-produced by New Orleans's writer, pianist Michael Pellera. ' The songs are different, and quite successful in blending the influence of Coltrane and other post-bop jazz with certain pop vocal echoes that I also hear and find to fit very comfortably. The lyrics creative narratives rather than mere moods, and the singing and playing are of a piece.' BOB BLUMENTHAL 'As a leader, Mangiardi, who presently lives in Paris, is at once a poetess and songstress. Her wispy voice tells of life and love with a certain innocence. As a composer, she creates a certain aura that acts as the stories' backdrops. Intricately constructed, they are improvised upon and adorned by her highly skilled and sensitive ensemble. While a softly rounded atmosphere most often prevails, the title track boasts moxie with it's more demanding rhythm and free-style saxophone work as the sparse lyrics open up the tune. There's a popish edge to Mangiardi's voice on 'Friendly Persuasion,' which also offers room for wailing. Mangiardi is a stylist, an artist who cultivates mood by employing unusual strokes. ' Geraldine Wyckoff GAMBIT MAGAZINE NEW ORLEANS Denise Mangiardi began writing and playing classical music at the age of ten and by the time she was 14 she was playing professionally beginning with NYC's 'The Bitter End.' She started out writing folk/blues type of music until she turned toward the jazz scene beginning with her introduction to 'Berklee College of Music,' where she majored in piano and composition. Her influences varied, including the blues of Blind Lemon Jefferson and Blind Billie Blake, to the folk/jazz style of Joni Mitchell and Laura Nyro, to the Motown pop of Steve Wonder until she came under the influence of artists such as Freddie Hubbard and Miles Davis. Coming under the wings of legendary pianist Ellis Larkin, Denise developed her singing style and became influenced by his rich sophisticated harmonies which have now become a unique trademark in Denise's style of composition as a lyricist and composer. She used to perform with Ellis in NYC and has played with some of the world's finest pianists. She has also studied harmony with pianist, Gary Dial and tenor saxaphonist, Gerry Bergonzi, who is featured on her latest CD, 'Naked Truth.' Denise often plays piano herself on gigs and prefers the small club kind of atmosphere. Denise also writes orchestral music. At the present time, she is leaning towards film scoring and had some of her music featured in an animated video by Regina Tierney's 'I Love my Fumily' which featured at the Ricco-Maresca Gallery in NYC. She has also had her string quartet piece 'City Park' played at the Ziegiest Theatre in New Orleans. Denise is a Native to New York and the eighth out of nine children. She has lived in many countries, including a five year stint in New Orleans where she recorded all of her CD's and feels most at home due to the wonderful support of many of the musicians. Her favorite place to entertain is in the New Orleans Premier Jazz Club, 'Snug Harbor' where she enjoys going to on trips back to the states. After two years of living in Paris, she now resides in London with her husband and two daughters.

Here's what you say about
Denise Mangiardi - Naked Truth.