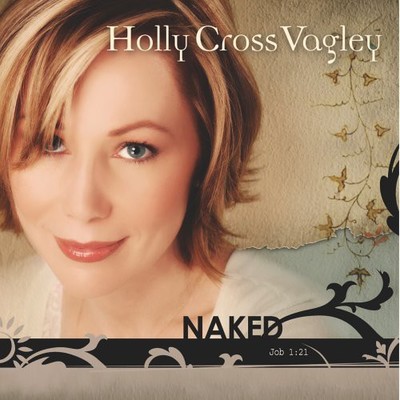 'Naked I came from my mother's womb and Naked shall I return there. The Lord gave and the Lord has taken away; Blessed be the name of the Lord.' (Job 1:21) Singing at the Memorial Mass for her friend, Barbara Olson, who was killed in the American Airlines plane that slammed into the Pentagon on 9/11, singer/songwriter, Holly Cross Vagley, learned that music could be a force for good and not just a good time. In the aftermath questions of 'Why, God?' soon changed to 'What? What do you want me to do?' Holly's debut CD is the answer to that prayer. Admiring an eclectic mix of singers from Maria Callas to Macy Gray and writers from Rodgers & Hammerstein to Maroon Five, NAKED (Job 1:21) features Holly singing nine of her own compositions and a favorite hymn. Job 1:21 and the loss of innocence shaped the title cut, 'Naked.' A modern-day Mary Magdalene and Jesus meet for the first time in 'Night and Day.' The 23rd psalm re-imagined as a love song is 'With You.' 'Invisible' tells the story of a woman stranded at the altar. The concept of sacrifice is explored in 'When the Rain Comes Down,' which was inspired by Mel Gibson's film, 'When We Were Soldiers.' And 'Why Not Try Jesus?' pokes fun at the ad campaign, 'Got Milk?' The nine originals are rounded out by the American spiritual, 'Softly and Tenderly,' which is dedicated to her friend. A Midwesterner, Holly acted and sang her way through high school and college, earning a BFA from the University of Kansas. She set out to see the western US and, ultimately, the world; performing at Lake Tahoe, the MGM Grand in Reno, doing her own act on the QE2 and aboard what Fodor's called, 'The world's most luxurious cruise ship, the Royal Viking Sun,' where she sailed to every corner of the globe. Not bad for a kid from Kansas. With little religious exposure, but for the Jewish parochial school where her mother taught, or Sunday school during summer visits with her grandmother, Holly drifted into nonbelief... Happily God had another plan. Time, introspection and a car accident proved to Holly she was NOT the master of her fate and needed Jesus Christ. She studied under the founder of DEWW, a life-changing, women's ministry, met Bob Vagley, a baptized Catholic and his two wonderful daughters, Erin and Beth, who said, 'Wanna meet my Dad? He's a bachelor!' Converting to Catholicism, marrying Bob and settling near Washington, DC lead to a guest-starring role on NBC's 'Homicide'; a pilot for NBC; another for the Discovery Channel; parts in movies like 'The Sixth Sense,' 'For Richer or Poorer,' 'Contact;' starring roles at the Kennedy Center; and appearing at the White House. On September 10, 2001, Holly was headed for Broadway in Andrew Lloyd Webber's 'Phantom of the Opera.' Again there was another plan. That Saturday she sang for Barbara's Memorial Mass. The response was overwhelming; friends, people at church, even strangers started asking for a CD of the music she was writing and singing for services and youth Masses. With Bob, their friend and pianist, Rod McCloy, two-time Grammy-winning engineer/producer, Jim Robeson, and some of Washington DC's best musicians they created Holly's debut CD, NAKED (Job 1:21). Featuring: Paul Bell: Slide and Acoustic Guitar Jim Robeson: Bass and Background Vocals Jaime O'Connell: Drums and Rhythm Guitars Rod McCloy: Keyboards Bill Starks: Organ Brian McDonald: Trumpet Chris Battisone: Trumpet Bruce Swaim: Tenor and Soprano Sax John Jensen: Trombone.

Here's what you say about
Holly Cross Vagley - Naked Job 1:21.