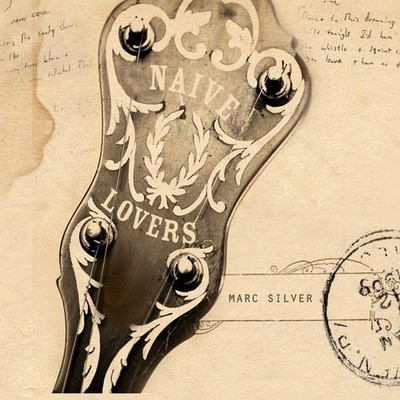 THE NEW RECORD: Naïve Lovers A new solo album from Marc Silver, which features his regular band, The Stonethrowers, as well as many other talented local musicians including: Bob Beach, Ross Bellenoit, Phil D'Agostino, and Suzie Brown. Produced by Andrew Lipke at The Record Lounge in Philadelphia, this new album is a departure from the bluegrass record Past Is Prelude (Marc's Second Album Release, 2008) but maintains Marc's signature style and lyrically mournful sensibilities. Naïve Lovers compiles ten great new songs that evoke an emotional landscape and take you on a journey across a new Americana. Highlights on this record include: My Dawn Is An Endless Night, which features a catchy melody echoed by a haunting piano solo; Won't Cross Over The Line is a classic Nashville-inspired Americana hit with drums, pedal steel guitar, a swinging vibe, and vocal harmonies guaranteed to make you move your feet; Naïve Lovers, the title track, is a whimsical and dreamy song with a guitar solo reminiscent of the sounds of Mark Knopfler or Joe Walsh. A real departure for Marc is the song Devil's Dust, which showcases the amazing harmonica playing of Bob Beach alongside rock'n'roll drums and bluesy electric guitar licks that are sure to have you driving a little too fast down the highway. As a solo singer/songwriter, Marc's self-accompanying guitar styling is bluesy, melancholic, and captivating. Lyrically mournful, but "uplifting in it's clear-eyed honesty." -Doug Wallen Marc enjoys playing solo, in small groups, or as a full quintet with his band, The Stonethrowers. The Stonethrowers began playing together in January 2007. They have opened for Bela Fleck and The Flecktones, Jerry Douglas, Chuck Prophet, Cabinet, Moe, and King Wilkie. The band blends a passion for traditional song, Appalachian fiddle tunes, and jazz with a unique mix of original songwriting, bluegrass and folk music. Lead singing with great vocal character and seamlessly blended three-part vocal harmonies fill out their energetic delivery. Winner: Best Band at Pickin' In The Panhandle, September 2008 Members of the Americana Music Association, IBMA & NERFA Reviews Philadelphia Weekly Review Nov. 2008 "Take back your heart/ I don't want it no more," pleads Philly song-slinger Marc Silver on Past Is Prelude, his third album. Another tune finds him on similar footing: "I don't wanna leave just to learn/ All I need was inside your heart." Just as timeless as those sentiments is the plucky, bluegrass-tinged folk delivered so sharply by Silver and his regular band the Stonethrowers. There's banjo and mandolin, upright bass and pedal steel, and lots of harmonies raining down, all serving to brighten Silver's somewhat mournful songwriting. But like the well-worn Appalachian tunes he looks to for inspiration, his own work is uplifting in it's clear-eyed honesty. (Doug Wallen) Philly Metro Jan. 2008 'A little bit of folk, a little bit of country and a whole lot of three-part harmonies add up to make this band one you don't want to miss.' South Philly Review: July 2007 'The band's ability to cross genres...has made it unique in a city where the lulling tunes of folk music aren't often heard.' TESTIMONIALS Marc and the band were amazing - friendly, professional and fun, they were exactly what we needed. Great bluegrass delivered by folks who could get people up dancing and share in the revelry! We loved their music online, and as we had hoped they were even better live. They helped us to add some personal touches to the set, and were a total pleasure to have at our party. Highly recommend them. Do it before they get famous and are no longer available! Thanks so much, Ronnie and Nikolle -- Nikolle K, Cornwall Bridge, CT, 8/16/2008 Start to finish, I thought they were excellent. Good communication before the gig. Very talented, accomodating and professional. They lent a great vibe to the party and we had no issues at all. Very highly recommended and without reservations. -- Michael P, Stanfordville, NY, 7/25/2009 The band was just great, they were flexible and open and friendly and really helped to make our event special. Great music too! -- Jane Ellen M, Point Pleasant, NJ, 6/28/2009 Marc Silver and the Stonethrowers are an incredibly talented band. They were on time and very flexible with last minute. Most importantly our guests loved them. -Karen H, 7/4/2009, Wedding, Turbotville, PA.

Here's what you say about
Marc Silver - Naive Lovers.