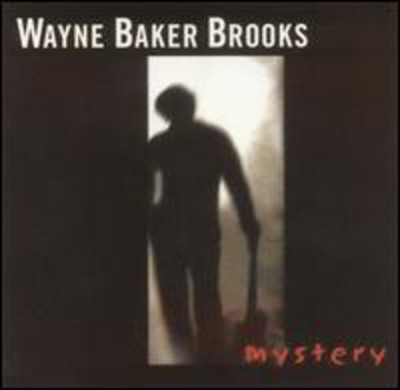 It is indeed a Mystery when that rare artist appears who magically takes a classic genre, like the blues, and presents it in a dazzling new light. Singer, guitarist, songwriter Wayne Baker Brooks is such an artist - as revealed on this incredible debut CD release. Mystery clearly illustrates Brooks uncanny grasp of what is essential in not only blues, but great music overall. This project offers 13 untouchable songs such as Root of my soul, Mystery, Baby, Stop, and Exiled - each performed with a truth that can only be expressed through deep talent. Naturally, it doesn't hurt that musical genius is part of Wayne Baker Brooks lineage, as his father, Lonnie Brooks, is a blues hero of world-wide acclaim or that Buddy Guy, Junior Wells, Koko Taylor, & Luther Allison to name but a few, are considered friends whom Wayne would tour and regularly jam with. But what is most important is that Wayne Baker Brooks has taken this incredible heritage to heart, made it his own and, with the help of an elite group of musicians, poured it into an astounding debut CD - Mystery. ___________________________________________________________ Mystery features: Wayne Baker Brooks (Brooks Clan): lead/rhytym guitar, lead vocals Ronnie Baker Brooks: (Brooks Clan) rhythm guitar Schuyler Deale: (Michael Bolton, Billy Joel, Foreigner) bass Jeff Jacobs: (Foreigner, Billy Joel) keyboards Matt Walker: (Smashing Pumpkins, Filter) drums Featuring: Lonnie Brooks Courtesy of Alligator Records Ronnie Baker Brooks appears courtesy of Watchdog Records Produced by Jeff Jacobs/Big Dog Bites Executive Producer - Devon Devick __________________________________________________________ Wayne Baker Brooks serves notice of a new, powerful force at play in the music world. Combining outstanding song craft, passionate vocals and a liquid fire guitar style, this talented artist manages to honor his rich blues heritage while effortlessly expanding the boundaries of the genre. Mystery is an intense sonic mixture comprised of a wide range of elements including the blasting heat of Texas, the joyous abandon of Chicago's wild Southside and the inspired devotion of Led Zeppelin at their blues-worshiping best. Mystery also features Wayne's father Blues Master Lonnie Brooks Courtesy of Alligator Records. This should come as no surprise. Wayne Baker Brooks is known for bringing the house down. Whether performing with his own WBB Band or hosting white-knuckle jams with blues legends like Buddy Guy, Jonny Lang, John Mayall, and Otis Rush, or famous rockers like Chris Robinson of The Black Crowes, George Thorogood and Slash of Guns N Roses, to name but a few, top critics of all media agree Brooks is an exciting artist not to be missed. 'He's got the talent, the energy and everything else to make it click, declares the Queen of the Blues, Koko Taylor, I'll bet my money that he'll succeed and that's something I don't do is gamble. As the son of blues superstar, Lonnie Brooks, Wayne was raised in an extraordinarily gifted and hard working household. He began his career polishing musical skills during the course of a staggering 150+ performances, year in and year out, with his father's band. It was a schooling like no other and Wayne's dazzling talent and stage presence quickly placed him dead center in the spotlight. This charismatic musician has been featured on nationwide television news programs, such as CNN Showbiz, as well as radio programs reaching approximately 15 million listeners in one days work, including The Mancow's Morning Madhouse Show, The Jonathan Brandmeier Show and House of Blues Radio Hour. In addition, his reputation has even reached the White House. On October 27th, 1999, the Wayne Baker Brooks Band performed for the First Lady of the United States, Hilary Rodham Clinton at Chess Records in Chicago. As the conclusion of the band's explosive set, Hilary pronounced, 'My husband is going to be so jealous he missed this!' Apart from playing and recording, Mr. Brooks enjoyed a cameo appearance in the Blues Brothers 2000, Barbershop I & Barbershop II movies and co-authored the book 'Blues For Dummies' for the famous educational series. To date, this edition has been translated into 8 other languages, with 30 more to go altogether. Quotes 'He's got the talent, the energy and everything else to make it click' --Queen of the Blues, Koko Taylor 'The future of blues is good hands & i'll tell you why with 3 words, Wayne Baker Brooks' --Tom Marker WXRT 'it is heart warming to see Wayne perform knowing the blues tradition is in good hands with the next generation' --Barry Dolins, Director, Chicago Blues Fest for 21 years 'his show was well done and full of excellent music and guitar from a man who learned his craft well' -- Dave Piltz 'Wayne has developed an impressive guitar style that incorporates the best of traditional and modern day Chicago blues' --Ray Stiles 'Don't be surprised if Wayne gains greater exposure for the blues and gathers a better marketplace for it' --Tim Holek, Blues Critic Wayne Baker Brooks set at The Pocono Blues Festival was electrifying....His set jumpstarted the 1st day of this 3 day National Blues Festival and set the tone for the weekend....Wayne is a must for all venues large & small and for any talent buyer that takes their music seriously. --Michael Cloeren, Founder & Producer Pocono Blues 'Wayne Baker Brooks takes what Chris Thomas King and Chuck D. started to a higher ground' --Tim Holek, Blues Critic 'Down and Dirty, from the-gut-blues' --Chicago Tribune 'A Must See' --Chicago Suntimes.

Here's what you say about
Wayne Baker Brooks - Mystery.