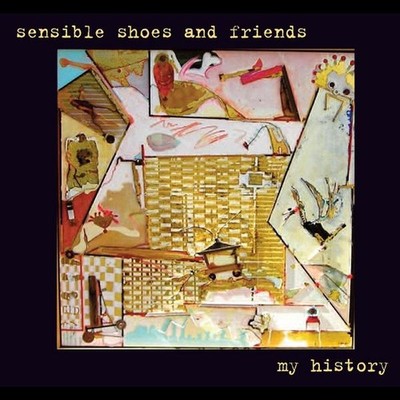 Sensible Shoes and Friends announces the release of their new CD, 'My History,' with 14 original songs written by ASCAP award-winning songwriter Barbara Blaisdell and Tim Utt, and featuring some of Vermont's favorite musicians including Jon Fishman of Phish. The CD also features international blues star Eric Bibb on a couple of lead vocals, one of which he cowrote with Barbara and Tim. Roots/rock in nature, the CD incorporates a variety of styles and vocal performances. ''My History' is really about our history as songwriters, musicians, and music lovers, exposed to many styles early on, now emerging from our collective musical attic. Like photographs, these songs are a form of remembrance, as much in concept as in content, from Stacy Starkweather's Motown-tinged bass lines to Tim Utt's Stax-like rhythm guitar groove to the awesome vocals of Jennifer Hartswick, a young lady soul. We are so lucky that our breathtakingly talented friends embraced our visions and put these songs in their best possible light!' Barbara is a member of the National Academy of Popular Music and has studied songwriting with Rosanne Cash. 'My History', by Sensible Shoes and Friends, features (in alphabetical order): Christine Adler, Eric Bibb, Barbara Blaisdell, Steve Drebber, Chas Eller, Jon Fishman, Dave Grippo, Jennifer Hartswick, Jamie Hosley, Tony Markellis, Bob Sparadeo, Pooh Sprague, Stacy Starkweather, and Tim Utt. Sensible Shoes has had several of their original compositions placed in major motion pictures. One of the songs on the CD, 'Talk Is Cheap,' appears in the feature film, 'The Manchurian Candidate.' 'Sensible Shoes is an energetic combo with a knack for packing the dance floor! Expect cool originals!' -Michael Witthaus, Connecticut Valley Spectator 'I go and check out a lot of new bands, and rarely do I stay for the whole show... When I went and saw these guys, I stayed for the whole show!' -Jon Fishman from PHISH 'Sensible Shoes has been wearing out dance floors wherever they go, inspired by Muscle Shoals as well as Motown!' -Seven Days, Burlington, VT 'Sensible Shoes rules the blues news!' -Jonathan Demme, Film Director.

Here's what you say about
Sensible Shoes & Friends - My History.