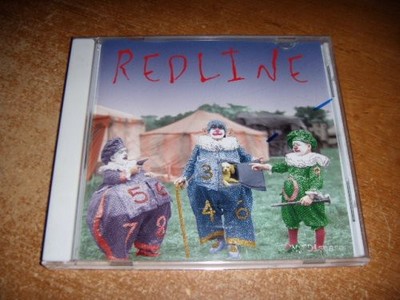 I was going to write a Bio about the Band but thought you may find it more interesting to see what other people have said. Please check out the following reviews. 'I don't like clowns. Clowns are scary. Especially clowns with poodles coming out of their stomachs or clowns with guns. There's a Richmond based band called Redline, with a snappy logo and slick clothes... who cover their CDs with pictures of clowns with guns and poodles coming out of their stomachs. Don't see a Redline show if you're one of those music fans who are upset about the way MTV ignores Huey Lewis and the News. This is one dramatic, powerful, together band ( Redline, not Huey Lewis ). The music on their indie CD ' My disease' is dramatic near - Goth, delivered seemingly by a band holding an ice cream cone in one hand and a meat cleaver in the other. Redline avoids many traps that make a band an easy target for criticism - being repetitive, uninspired, trendy or boring.. My first thought in listening was how great it would be scaring trick-or-treaters from my porch with this. Then I started really listening. The riffs are weighty and tight, heavy, fresh, alternative in their real form as an alternative to most of what is out there in clubs and on the radio.Their press kit calls them 'straight - ahead rockers' This isn't straight, thanks to singer Karl Anderson, who can sound as scary as the clown on his CD cover looks, or as attention grabbing as Iggy Pop on a baritoned mission of moodiness. ' Steve Hicks Contra Consta times 'Whether you're recording music, driving a race car or using heavy machinery, a red line means the same thing. It's a warning or a limit. Cross it and you risk distortion, overheating or damage. The members of Redline, a Petaluma based alternative rock trio, don't worry about crossing the line. They chose their moniker because they feel they're pushing the limits of rock music and breaking new ground. Their effort seems to be paying off. Their debut CD, 'My disease,' has received airplay on more than 100 radio station in 14 states since it was released last February. A new CD is scheduled for release in March. Redline sprinkles it's heavy alternative rock with doses of jazz and R & B. ' It's kind of heavy music meets Pink Floyd with a psychedelic sound,' said lead vocalist and bassist Karl Anderson. 'Our trademark is the beat and key changes. It gives moody ups and downs, highs and lows.' 'When we play together, there's a Redline sound that just flows out of us,' Anderson said. 'We have a chemistry that you can only get by playing music with the same people for a number of years. It's a chemistry that goes beyond keeping time or the beat. When we're writing a song, the guitar player may come out with idea and the other two will immediately know where to go. We start playing and the vocal lines just appear as a stream of subconscious reality The band's first album, produced by Motown veteran Billy Peaches, yielded several songs that have received extensive airplay, including 'One Spirit,' 'I Can't Take It' and 'My Disease.' One cut, 'Free me,' featuring saxphonist Vince Lars and Keyboardist Eric Daniels, has even been played on jazz stations. The final song on the final cut, 'Shining On,' a Grand Funk Railroad tune, was selected for inclusion on an upcoming tribute album to that 1970s power-rock band. Argus Courier 'I will be the first to admit that 'REDLINE' will be far different from any major recording artist you have seen or heard in today's market place. That's the way that it's planned it to be. My story begins in 2000 in Northern California.I had heard rumors about a local band from Sonoma county called REDLINE. A friend gave me their new CD 'My Disease'. I listen to the single 'One Spirit' on my drive deep into the Redwood country, where the band would be performing that night. When I walked into the club, there was a mob of people swarming around the stage. The sexual energy was intense and people were in awe of the sheer raw power the band was generating. I knew this band would be the wave of the future. The core of REDLINE is Karl Anderson and J.C. Prince. These two first formed the band in 1998. Karl Anderson is the vocalist / bass player and J.C. is the lead guitarist. These two have forged a musical union, that sometimes transcends a metaphysical realm, These powerful and talented individuals are truely masters of their own musical destiny. They isolate themselves from the world creating and shaping their brand of music. Their musical elements bring fusion to Goth, metal and rock. These new definitions soar to the next level, then without notice it crashes and hit rock bottom, exploring the dark underworld that lies below the surface tension of the music.There is rage anger and hell to be paid when all of these musical elements collide.' Michael Ali columnist SF Post. I now encourage you to listen to some of REDLINE's new singles at their website.Thank you so much for taking the time to check us out.

Here's what you say about
Redline - My Disease.