Westwind Brass - Music of the Californias 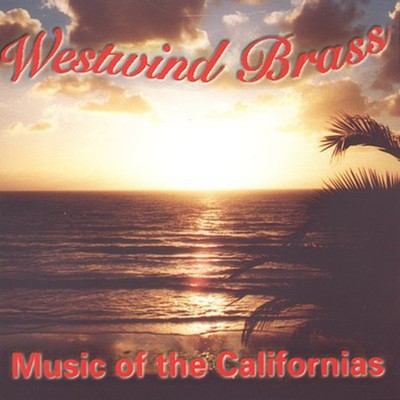 THE ARTISTS Barry Perkins - trumpet Mr. Perkins is from Irvine, California. He has been Assistant Principal Trumpet in the Mexico City Philharmonic since January of 1991. He has also performed with the State of Mexico Orchestra, Mineria Symphony Orchestra, U.N.A.M. Orchestra, Boston Civic Orchestra, and the Boston Philharmonic. In addition to years of freelance work, Mr. Perkins has recorded with Eduardo Mata, Bill Broughton, Paul Freeman, Daniel Catan, and others. Mr. Perkins's principle teachers include William Perkins, Dr. Richard Birkemier, and Charles Schleuter of the Boston Symphony. He received his education at the New England Conservatory. John Wilds - trumpet Mr. Wilds is a native of Seattle, Washington. He received his earliest musical training from his father on the highland bagpipes. Later Mr. Wilds' musical training took him to Central Washington University and Indiana University School of Music. John has held positions as principal trumpet in the New Mexico Symphony and the Mississippi Symphony before joining the San Diego Symphony. John is currently principal trumpet with the San Diego Opera Orchestra, San Diego Chamber Orchestra, second trumpet with the San Diego Symphony and has been a frequent substitute with the San Francisco Symphony and Los Angeles Philharmonic. Mr. Wilds has recorded for EMI, RCA, Naxos and Koch International. Barry Toombs - horn A a native of Galveston, Texas, Mr. Toombs holds a Bachelor of Arts degree from the State University of New York at Albany. He is currently a member of the San Diego Chamber Orchestra and also performs with the Starlight Musical Theatre, San Diego Symphony, San Diego Opera Orchestra, and SONOR the contemporary chamber ensemble at University of California San Diego. Barry has recorded for RJR Digital, Good Vibrations and Bonneville Classics. Richard Gordon - trombone He is a native of San Diego, CA, and holds a Bachelor of Arts degree in music from San Diego State University. He is currently a member of the San Diego Opera, and performs regularly with the San Diego Chamber Orchestra, California Ballet Company, Starlight Musical Theatre, SONOR the contemporary chamber ensemble at University of California San Diego, and in the commercial recording studios. Mr. Gordon has also performed many seasons with the San Diego Symphony. He has performed internationally with the Orquestra de Baja California, the St. Moritz Festival Orchestra in Switzerland, and most recently with the Sierra Brass in Japan. Mr. Gordon also composes, arranges, and plays specialty bass trumpet for the Clarion Trumpet Ensemble. Brent Dutton - tuba Brent Dutton, a native of Canada, is a musician of diverse interests and pursuits. He has an amalgam of careers as composer, performer, teacher, arranger and conductor. His musical studies began at age nine in his native Canada. He began composing at age ten and attended the Royal Conservatory of Music while still in highschool. Prof. Dutton has an extensive list of publications and performances in North America and abroad. He has published over 50 works for a wide array of instruments and ensembles from solo viola to full symphony orchestra. His music has been recorded by Deutsche Grammaphon, The Canadian Broadcasting Corp., Crystal Records, Kanda Records, Good Vibrations Records and PBS. He has received over 30 awards for his work including two Yaddo Fellowships, five Canada Council Arts Bursaries, The Phi Kappa Lambda Excellence Award (Oberlin) and the Royal Conservatory Of Music Silver Medal for Excellence. He has three times (1987,1989, 1993) been named Outstanding Professor of the Year for Music at San Diego State University and in 1985 was named Distinguished Professor of the Year for his College. He was the Phi Beta Kappa Lecturer for SDSU in the Spring of 1993, the same year that he was elected to the Canadian Music Center as Associate Composer. Prof. Dutton's compositions embrace a wide field of interests and techniques. The overriding compositional principle in this varied approach is a keen interest in balancing the emotive and structural aspects of the music so that both are mutually satisfying. As a performer, he has played as a soloist, chamber musician and orchestral musician on the tuba throughout the world. He has been a member of the Cleveland Orchestra, L'Orchestre Symphonique du Quebec, Grand Ballet Canadien, Jeunesses Musicales World Orchestra, and the San Diego Symphony, The San Diego Brass Consort and Westwind Brass as well as many other professional ensembles. He was the first tubist to ever do a recital tour of Canada. Mr. Dutton has been on the music faculties of the Oberlin Conservatory of Music, the California Institute of the Arts and Central Michigan University. He has been the brass coach for the Jeunesses Musicales World Orchestra from 1986-92 in Poland.

Here's what you say about
Westwind Brass - Music of the Californias.