Alicia Bay Laurel - Music from Living on the Earth 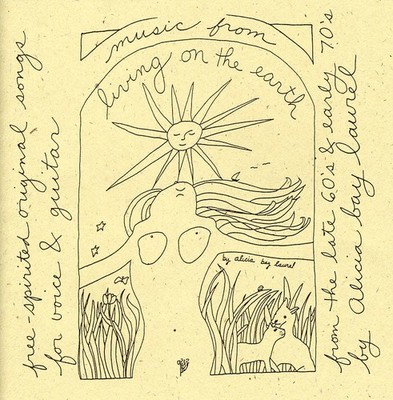 In 1970, at the age of 20, Alicia Bay Laurel saw her first book published, a guide to bohemian country living completely handwritten and illustrated with her line drawings, which she created while living at a hippie commune in Northern California. Living On The Earth hit the New York Times Bestseller List the following year, sold over 350,000 copies, and influenced thousands to live closer to nature and make things from scratch. In 2000, the book was published again in a 30th anniversary revised edition, and Alicia, now a professional musician, drove around the United States in a van for eight months, singing the songs she wrote alongside the original book at her booksignings. This CD is Alicia singing her songs, which richly evoke the spirit of the period much as the book does. Alicia learned the open tunings she plays on guitar directly from John Fahey, who was married to her cousin Jan Lebow when Alicia was in her 'teens. West coast jazz also filled her ears growing up in Los Angeles, and some songs evidence this influence as well. The lyrics reflect a love of all things spiritual and natural, of honesty, freedom, simplicity and gratitude. The final piece is a choral rendition of the first piece, arranged by Alicia's longtime friend and musical mentor, Ramon Sender, the co-author of the sequel book, Being of the Sun.

Here's what you say about
Alicia Bay Laurel - Music from Living on the Earth.