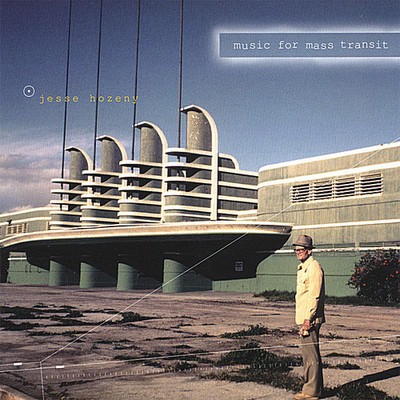 Drawing from influences as disparate as Brian Eno, Explosions in the Sky, Thievery Corporation, Unkle, and Boards of Canada, producer/multi-instrumentalist Jesse Hozeny fuses ambient downtempo with an acoustic tribal groove unlike anything else. "Music for Mass Transit," Hozeny's sophomore effort, is a bold move into new sonic territory. On this eagerly anticipated follow up to his first CD, "Niyama," Hozeny moves beyond his yoga music roots to craft a brand new sound that is both organic and electronic. Hozeny explains: "For this record, I wanted to explore the divide between analog and computer music. I wanted the CD to have a hand-crafted quality and yet retain the electronic element as well. So, I played and recorded almost all the instruments live, I let mistakes take me in unexpected directions, and I tried to capture a feeling of improvisation and spontaneity as the tracks unfold." The result is a flowing soundscape of considerable dynamic range. Not only does this music complement yoga and healing arts practice, it plays like a soundtrack for a life of movement. "When I got stuck for ideas, I would put unfinished tracks on my ipod and go walking around Chicago, or ride the train, or drive around, and I started feeling like I was making a soundtrack for the various ways we move in life-yoga yes, but any kind of movement, any transit-driving, flying, walking, dancing, breathing. And so the name of the CD is sort of a nod to that writing process." Vocals, acoustic and electric guitars, Fender Rhodes, piano, marimba, and live percussion form the core instrumentation of the CD. And while Hozeny's hip hop and breakbeat production background is clearly felt throughout "Music for Mass Transit," tracks like "Louise" and "Tell Me True" have an almost folky inflection that is a complete departure from "Niyama." For yogis and non-yogis alike, "Music for Mass Transit" is the perfect companion for a life of movement.

Here's what you say about
Jesse Hozeny - Music for Mass Transit.