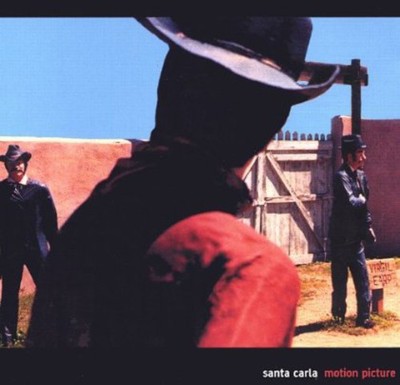 Santa Carla. Sounds like the name of some mysterious, sun-soaked town on the Pacific coast. You may know it as the 'Murder Capital Of The World' in the classic 1987 picture 'The Lost Boys.' Now it serves as the calling card for the new British band Santa Carla. The band chose the name because 'Being in this band is sometimes like being on a creepy Boardwalk carousel. Vampires and cold, heartless bloodsuckers are everywhere in the music biz.' Santa Carla are a band for the Ferris Bueller generation, overflowing with colourful, consise pop tunes, indelible choruses, razor sharp lyrics and broad influences - from Ben Folds to XTC, from Pearl Jam to McCartney. Like Michael Knight, Santa Carla consider themselves lone crusaders in a dangerous world. They combat musical baddies with their off-beat recipe of bulletproof melodies, juggernaut basslines, zen guitars and epic harmonies. The band was born of a friendship between three Liverpool lads, the songwriting team at the heart of the outfit... Simon Barber, Brian O'Connor and Chris Pye met in a dank city centre rehearsal room in the winter of 1995 after seeing an advert posted by Chris. They worked the underground Liverpool scene between '98-01 testing out their material and evolving, but like the shooters in Dallas in '63, they did their job unnoticed by the crowds. The boys were sounding more and more like strangers in their own hometown. Feeling lost, they retreated to their 'Juicing Room' studio and archived an unreleased box set of 100 songs. The recordings captured the trio's compulsively entertaining outpouring of vivid characters, hardboiled disappointment, and witty experimental humour. 'It was like the dam had finally broken' says singer and guitarist Simon. They circulated twelve of these raw tracks under the working title 'Motion Picture' ...and then everything changed. Keys player Pete Watson heard the early demos and quickly joined the snowballing album project. Singer/Songwriter Vicki Dempsey was next. This was one hell of a transformation. It was as if they had just pissed off David Banner. The Santa Carla monster had finally crashed through the doors of the music scene. March 2003 saw the national UK release of their début album, Motion Picture on Digital Wings. With it's distinctive, retro-Americana sound, the album provoked killer press from London to Los Angeles, selling-out the entire first run in just eleven tour dates. Following this, their first single 'Mister Operator' was being picked up for the soundtrack of a New York movie, and scored with airplay on over 600 American Radio Stations. 'We've had such a positive reaction to the record and the 2003 UK tour that we're all dying to see how people react to what we do next' says drummer Chris. Santa Carla show no signs of slowing. 'We'll be playing live' says Vicki 'but mainly hibernating to write and record a follow-up album with Mike Crossey (Grandmaster Flash, Atomic Kitten, Echo and the Bunnymen). There's a revamp of the website coming, tons of new pictures, videos, another tour, and loads more music.' The carousel keeps turning. 'It's like the moebius lines in our logo' says bassist Brian, 'this band never stops revolving and evolving, and there's so much new music coming out of the rehearsal room at the moment. It's the tip of the iceberg.' Pete agrees: 'I'm looking forward to spending the cold winter months in Liverpool's nasty old rehearsal rooms, making things work.' Back home, Santa Carla continue to push buttons in Liverpool's musical arcade. 'We're the odd men out here, but we never go away' says Simon with a smile 'we're like Billy Glick, tapping our nails on your window while you sleep.'

Here's what you say about
Santa Carla - Motion Picture.