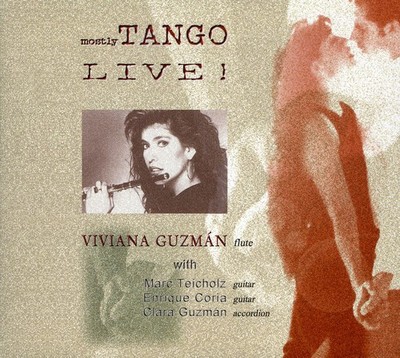 The Tango was born more than 100 years ago in Buenos Aires in the impoverished neighborhoods of newly arrived immigrant population. Within the merging, and clashing of cultures the embrace of tango became the bridge across which the human spririt could travel. Influenced by the percussive rhythms of Candombe, tapered by the Cuban habanera and expanded in melody by European instrumentation, Tango evolved as the new language of the underworld. It enabled people to cross the economic and socail boundaries of their divided society. This fervent quartet, led by the outstanding, Chilean born flutist, Viviana Guzman, is comprised of the world's finest musicians, Marc Teicholz, Enrique Coria, and Clara Guzman. Together they voluptuously express the sensual rhythms of the tango, giving renditions of both the old traditional tango repertoire as well as the tango nuevo; the latter version represented by such magnificent modern composers as Piazzolla and Pujol, who beautifully developed the classical version of this dance form. In this riveting live recording, these fine musicians ardently recreate the burning arousal, excitement, and tradition that is TANGO. Described by the New York Times as 'an imaginative artist,' Chilean-born flutist, Viviana Guzmán performs over 80 concerts a year throughout the world. By the age of 15, she played as a soloist with the Houston Youth Symphony, studied with Jean-Pierre Rampal and was featured on a John Denver nationally televised music special. She has performed as soloist with orchestras from Russia to Chile and in such halls as in Carnegie Hall, Avery Fisher Hall in Lincoln Center, and other prominent stages with such artists as Mikhail Baryshnikov, Placido Domingo, and Glenn Close. Ms. Guzmán studied with James Galway and Jean-Pierre Rampal and received a Master's degree from the Juilliard School with Julius Baker. She has played with the Houston Grand Opera and the New World Symphony in Miami. She has recorded with Polygram, Sugo and National Geographic record labels which have been heard nationally on NPR and other radio stations; her music video was aired internationally in 30 countries . She has performed in 72 countries including China, Tahiti, Japan, Australia, Slovenia, Italy, South Africa, Argentina, Chile, Turkey and Egypt as a soloist as well as a member of "Festival of Four", and with "Viviana & DIVAS LATINAS". Classical guitarist, Marc Teicholz is the first prize winner of the 1989 International Guitar Foundation of America Competition.  He has toured extensively throughout the world receiving critical acclaim for his recitals and master classes.  He has appeared as a soloist with orchestras in Russia, Portugal Spain, Hawaii and California.  He has recorded several solo CDs for Naxos, Sugo and Menus and Music, as well as the pilot soundtrack for George Lucas, 'Young Indiana Jones'.  He is on the faculty of the San Francisco Conservatory and at California State University at Hayward.  Mr. Teicholz graduated magna cum laude from Yale University, received a master's degree from the Yale School of Music, and a J.D. from the University of California, Berkeley at the Boalt School of Law. Over the course of 20 years, Enrique Coria has played on approximately 400 different recordings with popular groups from Argentina, Chile, Uruguay, and Bolivia.  Enrique possesses the trait of musicians who aren't afraid of immersing themselves in music of other cultures.  He can shift effortlessly from classical to popular.  Currently, Enrique tours with David Grisman and records with Acoustic Disc. Originally from Valparaiso, Chile, accordionist, Clara Guzman has toured Chile, Puerto Rico, France, Portugal, Spain, Holland, Belgium, South Africa and Italy presenting the music of South America on board the five star luxury ships of the Seabourn and Cunard Cruise Lines.  She has been on the faculties at Rice University in Houston and at the Universidad de Maracaibo in Venezuela.